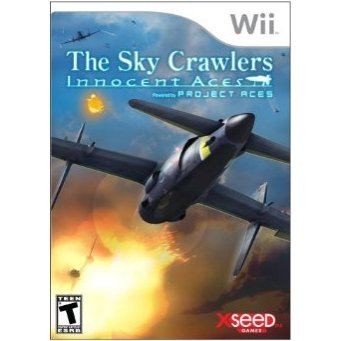 NTSC
1w Expected stock arrival within 1 week
Price
US$25.99
Our previous price:
US$ 34.99
You save:
US$ 9.00( 26% )
Play-Asia.com Return & Refund Policy
Trustpilot
Trustpilot
Click on a thumbnail to see more pictures for Sky Crawlers: Innocent Aces

After decades of constant war and fighting, the world has finally come to a lasting peace. But with war being an integral part of their lives for so long, the citizens of the world are desperate for a solution to solve this newfound peaceful life of calm and tranquility.To ease this tension and to appease its citizens, the government has started pursuing a new round of wars. These new campaigns are not a power struggle between hostile countries, but rather sponsored events between private corporations with military-trained personnel contracted by each side to do their biding for them. It is the battles fought by these corporations such as Rostock and Lautern and the constant media reports on them that satisfy and replace the basic human instinct to fight using the war as a show.The latest rookie pilot to join the Sky Crawlers, codenamed “Lynx,” is working his way up the ranks and becomes involved in a secret new military project with the goal of making pilots immortal. Join Lynx on his journey to conquer the skies while unraveling the mystery behind the military’s covert new project.

If you are familiar with Sky Crawlers: Innocent Aces, why not let others know?

tedmahsun (20) on 20, Sep. 2010 22:12 (HKT)
Unique controls
...but don't let that scare you. It's a great game once you get used to it!
marine_ruphert (1) on 29, Mar. 2010 15:37 (HKT)
Great game. The motion controls do take a while to get used to, and even longer to master (something I still haven't done), and while in some small instances they can have you flailing about in the sky like a magikarp, they really add to the immersion of the game. The game has a manoeuvring meter, which fills up whilst your within a range of an enemy plane, which initially seems really cheap, but as you progress the enemies became increasingly more challenging, and even use the system against you. Overall, the game is a must by with an evolving plot, that can drastically change the scope, pace and even objectives of mission whilst your in the air. Do get!
amonjuhu (11) on 24, Feb. 2010 22:50 (HKT)
Awesome, but not perfect
I just love this game as it tests my ability to multitask (a skill I learned from playing as Amonorhunter in the Terokkar-server). The third mission was also were the difficulty started to shine in hard mode, so I went on to test it in normal. Still hard for someone not taking the game seriously. I've yet to play the third mission in easy mode, but I believe it'll kick my ass. Might start to take the more advanced tutorial missions to see if those skills can take me higher in scores.

Yeah, I love those scores. Really old-school. I plan to get back and really start to beat my scores after I've beaten down the main game. That's what motives me the most to skill-up my abilities in the game as the gameplay is so fun. The best flying game I've tried as of now.

Please do not buy this game and beat my scores and upload it in the leaderboards. Doing that will make me feel less like a real life-loser, as being in the middle means you can still better those at top; Yet at the same token, you will look less a loser in real-life person's eyes. ;P

Story is there for someone not looking for the next best thing after a serious reading session of Jeung (sorry, my book-reading is poor).

Overall, really happy about my purchase. Every game that takes me away from the strong iron grips of Activision/Blizzard's World of Warcraft deserves at least a four, even though I wanna give it a fiver (but, that'll be unfair for those looking for real reviews; As it means I would've done that just to piss-off Nintendo-whiners not getting 3rd party support for Nintendo).