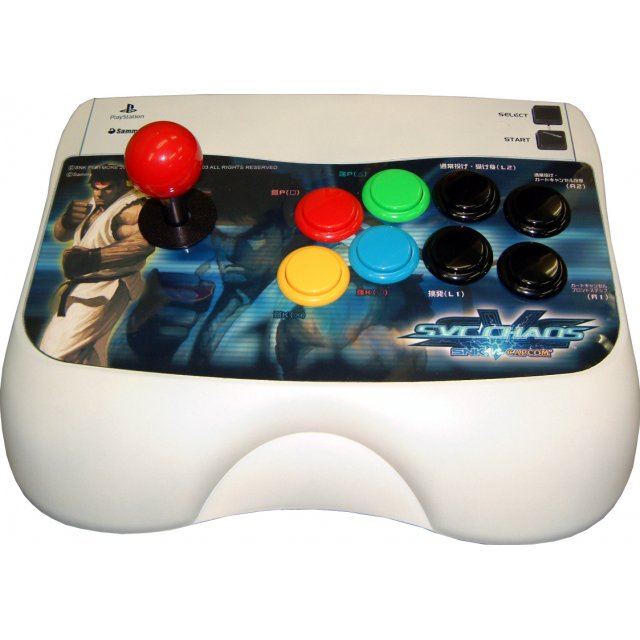 Sammy
Compatible with PlayStation 2™ (PS2™)
Get informed when this item is in stock by using our Personal Agent from the right.

The SNK vs. Capcom Chaos Fighter Stick from Sammy has been specially designed for Capcom vs SNK Chaos for PlayStation2™. It features extra large "punch" and "kick" buttons. Available as SNK and Capcom model. A great accessory for all fans of the series.

If you are familiar with SNK vs. Capcom Chaos Fighter Stick: Capcom Version, why not let others know?

S. Swetz on 30, Jan. 2005 15:56 (HKT)
not to be confused with the old Ascii Figter Sticks
Though the mold and button layout are exactly the same as the Ascii sticks, it is clear these are entirely different components. As mentioned by others: this is a clicky stick. It should also be noted that there is an octoganal gate around the stick.
Even though I was looking for the smooth Ascii style joystick, I\'ve been very satisfied with the responsiveness of the stick and buttons while playing shmups.
One major point that must be noted is that the top graphic is a decal - right out of the box there is peeling evident where the decal overlaps the rivet or srcew heads at four different points. It is minimal, and hasn\'t expanded at all through heavy use, but it is an unneccesary concern. And while I\'m knitpicking: I\'d swear the plastic top-shell is made of a thinner plastic than the Ascii fighter stick I\'ve got.
Bob on 23, Oct. 2004 16:12 (HKT)
Bad
The stick is way too stiff. It sucks. Also, it would be nice if the buttons clicked like the stick does. Anyway, this is probably the worst click-stick I\'ve used. At least the design is cool-looking.
strangepork (2) on 11, Aug. 2004 02:57 (HKT)
Alright but.....
Very nice stick, the start and select buttons are far from accidentally pressing during a game. the buttons are very nice, The stick itself is pretty tight with the controls. Not very loose, which is also good. So why havent i given it 5 stars? The actual ball is removable. I found myself playing for a good 15 minutes, when the ball came off. The quarter circle motions, eventually took its toll.
Anonymous on 24, Feb. 2004 13:42 (HKT)
Great stick
This is a very very good stick. It is very responsive, i have no problem pulling off quarter circle or double quarter circle moves with it. the buttons arent really clicky, but the stick is. It may bother some of you. other than that, this sitck is great and i am told by alot of people that this will probably last for years to come