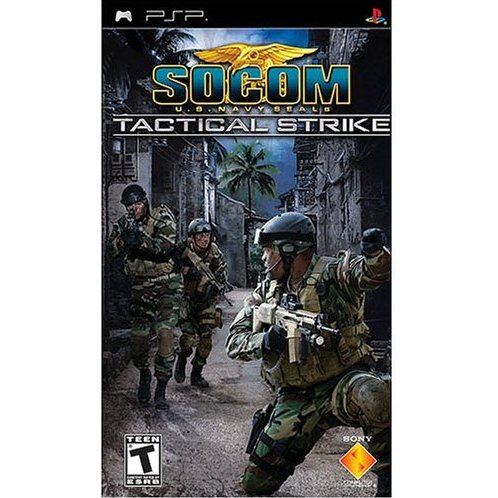 Works on all systems sold worldwide, a correct regional account may be required for online features.
1-2w Expected stock arrival within 1-2 weeks.
US$20.89
Our previous price:US$ 25.99
You save: US$ 5.10( 20% )
Manufacturer
Sony Computer Entertainment
Compatible With Sony PSP™ (PSP™)
Version

Works on all systems sold worldwide, a correct regional account may be required for online features.
1-2w Expected stock arrival within 1-2 weeks
Price
US$20.89
Our previous price:
US$ 25.99
You save:
US$ 5.10( 20% )
Play-Asia.com Return & Refund Policy
Click on a thumbnail to see more pictures for SOCOM: U.S. Navy SEALs Tactical Strike (Greatest Hits)

In the midst of rising instability, insurgents have abducted the U.S. ambassador. Sanctioned by the Panamanian government, America's elite fighting force has been deployed to rescue and extract the ambassador. Take control of an entire SEAL team and engage in real-time tactical combat, where you evaluate each situation, determine a plan of action, and then execute on your command.

If you are familiar with SOCOM: U.S. Navy SEALs Tactical Strike (Greatest Hits), why not let others know?

PuNiao (365) on 08, Feb. 2008 17:47 (HKT)
SOCOM: U.S. Navy SEALs Tactical Strike
Socom brings the experience of movies such as Black Hawk Down and Tom Clancy's Clear And Present Danger novel to the portable gaming screen. It's not about going in with guns blazing, so action junkies need not apply. Your mission is to guide four Sea, Air, Land or Seal commandos - picked from various countries including the United States, Britain and France - indirectly, by using a cursor-like pointer to move them around the stages. Which makes you like the manager of a football team like Arsenal, albeit with a team of actual gunners taking on "tangos" or terrorists. Pressing the various control buttons of the PSP gives contextual menu commands to the four Seals, to say, shoot nearby terrorists, throw grenades or shoot at selected targets from a long distance. It takes one mission to get to grips with the array of commands. The strategy remains the same throughout: Sneak around in each location, take cover in the best available position, and shoot to kill. Then, sneak around some more until you reach a designated location. Unlike Rambo, your four men are vulnerable - and mortal: If they are caught in the open or under inadequate cover, death is certain. Best survival tactic: hide the men behind objects like barrels or logs to shield them from unfriendly fire. Luckily, though, the Seals improve their skills after every mission, so they fight better even as the mission gets progressively tougher. The single-player game serves as a boot camp before you gain enough confidence to take on other Socom fans online. In terms of graphics and sound, the game delivers on both counts. The jungle locations and the terrorist bases look sharp and atmospheric, with PS2 console-like quality. The gunfire effects and the soldier talk among the Seals, sound as dynamic as in any war movie. The game's infrequent checkpoint save system is a killer, though. You might just throw your PSP like a grenade, in frustration when you need to replay the last 20 to 30 minutes - just because you die before reaching the next checkpoint to save the game. But on the whole, armchair generals with plenty of patience, should shoot for this game.
x (34) on 22, Nov. 2007 17:39 (HKT)
SOCOM: U.S. Navy SEALs Tactical Strike
this game has gotten some pretty low reviews on various gaming sites, but being a SOCOM fan, i picked it up, and was pretty happily surprised. i\'ve played other strategy games on the PSP, but this is the only one i\'ve played where your actions unfold in real-time on the battlefield. the controls take a little learning, but anyone familiar with games like Full Spectrum Warrior won\'t be too lost here. and i have to say, it\'s a style of gameplay that translates well onto the PSP. on the down side, it isn\'t always easy to get a good view of the action since the camera is always tied to a member of your team. also, the game is not very on-the-go, with somewhat long loading times and long stretches between save points. but i would recommend this to anyone who digs military strategy gaming, or fans of the SOCOM series.