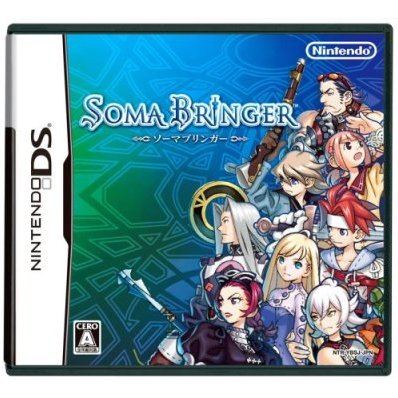 Works on all systems sold worldwide, a correct regional account may be required for online features.
1w Expected stock arrival within 1 week.
US$56.99
Our previous price:US$ 65.99
You save: US$ 9.00( 14% )
Manufacturer
Nintendo
Rated By Our Customers
Compatible With Nintendo DS™ (NDS™)
Version

Works on all systems sold worldwide, a correct regional account may be required for online features.
1w Expected stock arrival within 1 week
Price
US$56.99
Our previous price:
US$ 65.99
You save:
US$ 9.00( 14% )
Play-Asia.com Return & Refund Policy
Trustpilot
Trustpilot
Click on a thumbnail to see more pictures for SomaBringer

“Under the warmth of the enormous ring that embraces the planet, enveloped within the atmosphere charged with Soma, people slumber, awaken, and live”This is a world where an energy called Soma dominates.Lately, the balance of Soma tipped, and a mysterious life form, called “visitors” appeared and people started to live in fear. To defeat these visitors, the people established a military group called the Falsif. During an investigation in the Junel forrest, a member of the seventh troop met a girl who has lost all her memories, and thus...

If you are familiar with SomaBringer, why not let others know?

eleonoragatti13 (2) on 12, Feb. 2013 15:40 (HKT)
A very nice RPG
Since I love RPGs and I'm studying japanese, this game was a must buy for me. I was not disapponted at all! A nice cast of characters, an interesting story and a fitting soundtrack are what I most appreciated in this title. Try it and you won't regret it.
lavauxrudy (18) on 08, Jul. 2011 16:01 (HKT)
A masterpiece on the Nintendo DS
Wonderfully made background graphics, well rendered characters, beautiful music by famous composer Yasunori Mitsuda, a great narrative, and a well designed battling system... that's what awaits you in Soma Bringer, which easily ranks among the top 5 best RPGs the handheld has to offer.

It's definitely worth importing, especially since it got an almost complete fan translation.
rudy_h7201 (120) on 20, Jan. 2011 14:38 (HKT)
Great game
It's a Xenosaga spiritual successor in design and music, although the game play is different. It's such unfortunate this game isn't released in US or Europe region. But it makes me eager to learn Japanese
joelrosenstam (1) on 01, Jul. 2010 14:40 (HKT)
A must have game for the DS console!
Great game, many customization options to everything in the game, I love the combat mode. Resembles something in between "Secret of Mana" and the "Diablo"-series.

Even though you may not know Japanese, this game is still very easy follow, just follow markers on your map and the story is telling itself, so it's very friendly for non-japanese speakers.

Very fun multiplaying mode, too bad it just supports for two others a (and they also need a seperate game card each)

New diffuculties and side quests and options of costumization makes this game a "Long living" game and will bring hours of joyfull gameplay.

Probably the best (new) RPG-game out for the DS.
fedeilfolle (4) on 26, Oct. 2009 18:35 (HKT)
No title
This is the best game i have ever played, full of customization on your character and nice skills effects, i hope in future they can translate all other EPIC-games like this or they can suck my...
1 »