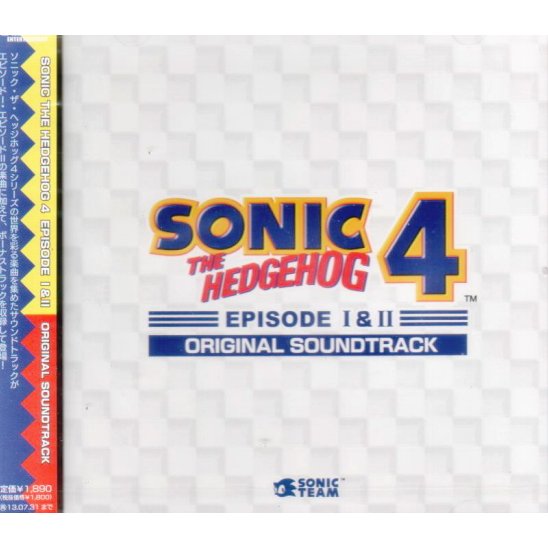 sold Out of print / Out of stock.
Please take note that, once purchased, this item must be paid immediately and cannot be cancelled or returned.
Wave Master
Version

Run faster, and faster, and faster than sound. Sonic the Hedgehog 4 is coming. The first episode in this series is immensely popular. The Hedgehog gets involved in even more action in the second episode. The game is said to be a tribute to the origins of the series, the mechanics and the flow of the game inherits the features of Sonic the Hedgehog and Sonic and Knuckles. The music, too, is reminiscent of the good old times, but at the same time it brings in fresh elements. The album contains music from both Episode I and Episode II, so run through both adventures in this musical journey.

If you are familiar with Sonic The Hedgehog 4 Episode I / II Original Soundtrack, why not let others know?

martinalexanderlopez (8) on 24, Dec. 2012 20:11 (HKT)
This CD is a nice addition to every Sonic collection. It contains the compete soundtrack from both epsisodes of Sonic the Hedgehog 4. The booklet is nicely made but contains only a complete track list.
Listening to the songs makes one wanna play the games again.
sonicool (32) on 11, Aug. 2012 10:46 (HKT)
The music could have been great if the tracks are not synthesized or at least not recorded in such a way for this official album. Fortunately (or unfortunately?), the only one unsynthesized track included in this album is the bonus track, which is quite listenable with familiar Jun's style.

Episode I's tunes are more memorable to me however.