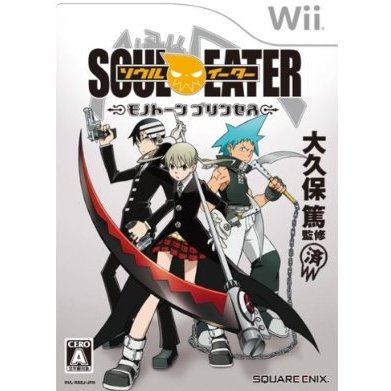 Square Enix
Rated
By Our Customers
Compatible with Nintendo™ Wii (Wii™)
For JPN/Asian systems only.

“Wandering souls, the time for salvation has come.” the strange man declared to the crowd in the dead of the night. And all who have attended this meeting disappeared.A mass disappearance of people is prompting action from the death angel academy as the teacher has assigned the task of investigating the case to his students. However, upon investigating the incident, Mako and her friends came upon white, masked creatures and agents who have been gathering souls.Predators usually devour souls they have gathered, but these agents who called themselves hatchers of the demon's egg are gathering them for unknown purposes. Soon, our beloved cast realized that the scheme behind the agents and the appearance of the white masks are far more dangerous than any other assignments the academy has ever set for them.

If you are familiar with Soul Eater: Monotone Princess, why not let others know?

metalfiddi (15) on 02, Jun. 2012 05:39 (HKT)
A very good game
This is a very good game and a must-own for every Soul-Eater fan. It was everything I wanted it to be and even more. Thank you Play-Asia for having this game at a very good price :)
demonofheaven (8) on 03, Dec. 2009 09:35 (HKT)
Decent
Average beat em up but controls are a little lacking
DONNIemo (152) on 30, Nov. 2009 08:29 (HKT)
Great for fans of the Anime series.
True to the Anime and a great challenge.
Anbu523 (1) on 09, Jun. 2009 13:24 (HKT)
Not Nice
I play a decent number of beat em up and mission based games. In my humble opinion square-enix made this game in a few months. Mario Galaxy has better graphics, the gameplay is nowhere near fluid and they paid more for the art than the animation of gameplay mechanics. With a company that did the Bouncer you would expect better fighting mechanics in a beat em' up that would have been a smash success had they stuck to the premise of not making a game licensed by the company that makes it.

They should take a note from the Naruto games and try to make a good game first and worry about the storyline and such after the fact. I moving storyline is not going to motivate someone to continue to play games where such poor animations should be a thing of two generations of consoles ago. Not to mention the in game avatars were awful the only thing they got right were the voices. Sorry if this is harsh. I'm a big souleater fan but this is too much. Do not buy this game buy tatsunoko or guilty gear. This is for fanatic fanboys/girls only.
mr-gentleman (2) on 04, Oct. 2008 02:05 (HKT)
Nice
This game is pretty nice (though I don't completely understand japanese).

It has it own unique story (not just part of the anime), most of your time in the game is inside Shibusen, where you talk to people and they tell you who to talk to next (yes a lot of running around, but don't worry, the places you have to go have Icons of the character you need to speak to, so easy not to get lost).

In this game you can chose any of the 3 main characters and their weapons, you'll get missions where you can lvl up if you get a good grade (leveling up gives you longer combos and better special moves (Soul Resonance).

I give it 4 out of 5, because I don't like the movements that much, it's sometimes hard getting out of the way before your enemy attacks, but aside from that great game.

(got it today so can't tell more:P