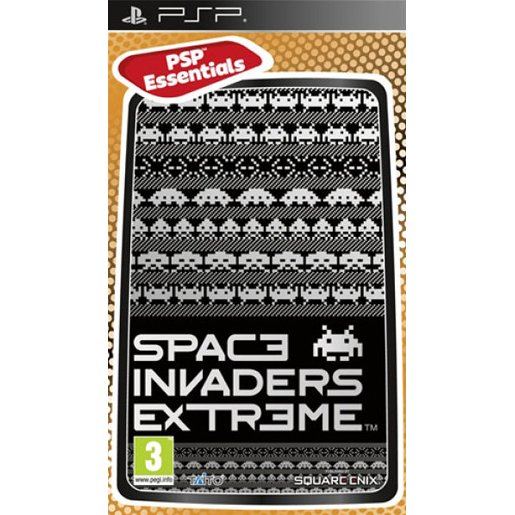 Works on all systems sold worldwide, a correct regional account may be required for online features.
1-2w Expected stock arrival within 1-2 weeks.
US$14.89
Our previous price:US$ 19.99
You save: US$ 5.10( 26% )
Manufacturer
Square Enix
Rated By Our Customers
Compatible With Sony PSP™ (PSP™)
Version

Works on all systems sold worldwide, a correct regional account may be required for online features.
1-2w Expected stock arrival within 1-2 weeks
Price
US$14.89
Our previous price:
US$ 19.99
You save:
US$ 5.10( 26% )
Play-Asia.com Return & Refund Policy
Trustpilot
Trustpilot
Click on a thumbnail to see more pictures for Space Invaders Extreme (PSP Essentials)

“Space invaders is COOL and EXTREME!!”In 2008, Space Invaders will reach its 30th anniversary. Space Invaders is obviously widely known as a game, but also as a motif. Even the members of the younger generation who have never played the game have come into contact with its icons through fashion and other designs. So this name is loved throughout the generations.The popularity of Space Invaders and its motifs transcend generations, and this time it is remade to combine brand new visuals and exhilarating gaming experience in an innovative system, and this becomes the Space Invaders Extreme!This Space Invaders Extreme will not only re-attract the gamers of the previous versions, but appeal to new and younger players as well. To maximize the game's enjoyability, the shooting system is incorporated with elements like speed, freshness and is powered up in all aspects.This is a game that must be played.

If you are familiar with Space Invaders Extreme (PSP Essentials), why not let others know?

[This review is based on another version of this product]
auzcoffee (4) on 29, Dec. 2010 19:19 (HKT)
Definately worth your money!
This is a game you won't regret! It's soooo addictive and you keep coming back to score higher points. Ifyou are nostalgic about the good old arcade times and spend most of your childhood playing pace invaders, this revamped version is just for you. It is completely stylish and remastered, perfect for a great psp experience.
[This review is based on another version of this product]
TAS (112) on 01, Dec. 2010 16:33 (HKT)
Love it Love it LOVE IT
This DS version might lack the punch of the PSP version's dizzyingly awesome optical-disc based soundtrack, but makes up for it with a 2-screened truer representation of Space Invaders gameplay - especially during boss battles - a stronger multiplayer component and generally more extras than the PSP (truth be told though, both versions are brilliant).
Whilst the music based gameplay germinated from an idea originally featured in the somewhat forgettable PSP shooter Space Invaders Revolution (aka Space Invaders Galaxy Beat), here it is fully embellished in the most explosive fashion. !Magnifico!
[This review is based on another version of this product]
DeleteMy (8) on 11, Feb. 2010 10:08 (HKT)
Extreme Fun
Space Invaders Extreme is a great game to pick up and play. The old school style mixed with a more modern pattern style gameplay is a welcome improvement to the franchise. Extreme Fun!
[This review is based on another version of this product]
Lapinot (1) on 17, Mar. 2008 22:49 (HKT)
mesmerizing! Sure, it's that old space invaders everybody knows, moving left, right, one button to shoot...only beefed-up to such an excessive level it becomes a whole different experience with psychedelic (and fantastic though simplistic) visual, hypnotic techno BGM, interactive sound FX and actually a subtle gameplay including multiple weapons, varied waves of enemies and branching levels. The vibration cartridge compatibility is a nice and well executed touch but since the vibrations follow the beat of the soundtrack, it can get annoying. Put the GBA port to a better use and plug the paddle controller in instead. The Taito controller accessory adds up significantly to the experience with faster and more accurate motion: the paddle controller is THE way to play this game which fits the DS perfectly.