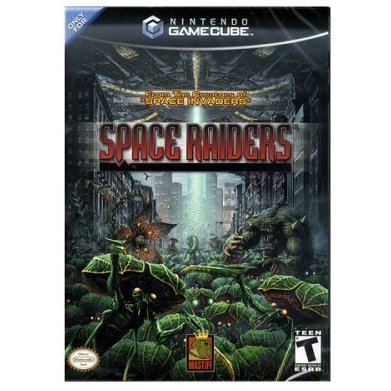 Mastiff
Compatible with GameCube™ (GC)
For US/Canada systems, use Freeloader for other.

More than 25 years ago, Taito crashed the arcade party with the classic Space Invaders. Those aliens have regrouped, and they mean business in Space Raiders.You play as one of three characters (Justin, Ashley or Naji) and attempt to save the Earth from this alien invasion. These well-crafted, 3-D aliens attack your heroes much like they did in the arcade classic. They start from the back and move toward your position at the front of the screen. However, the aliens have learned better tactics since their last invasion and attack you from all sides and with all sorts of firepower. Some of the aliens dive-bomb at you while others sneak down the sides to get to your level.To fight these extraterrestrials, you get a gun and some grenades. Doesn't sound like much firepower compared to intergalactic laser beams, but your weapons work effectively.You and a friend can compete in Survival mode. In this mode, you work as a team to eliminate the aliens, but once you die, you're done. No continue. No nothing. You play for the high score. In Story mode, you fight aliens in several different locales to force them to retreat back to space. The end of each level has its own boss, and in the end, you'll battle aboard the alien vessel. The gameplay is exactly the same whether you play Story or Survival mode, except Story mode lets you continue if the aliens overcome you.

The Chronicles of Narnia: The Lion, The Witch and The Wardrobe
US$ 22.39

If you are familiar with Space Raiders, why not let others know?

[This review is based on another version of this product]
newinjapan2002 (143) on 17, May. 2006 02:20 (HKT)
Repetitive and mediocre
A rip off of Space Invaders, except this time you play as 1 of 3 humans holding a gun instead of a spaceship. You kill all the aliens, advance to the next screen, and within about an hour or 2 you can finish this game. You can play as 1 of 3 characters but no matter who you choose the story doesn\'t change. Even the movie cut scenes are the same, only the character is different. I was pretty unimpressed with it. The only thing this game had was pretty graphics and a cool intro. That\'s it. Stay away or buy it cheap.