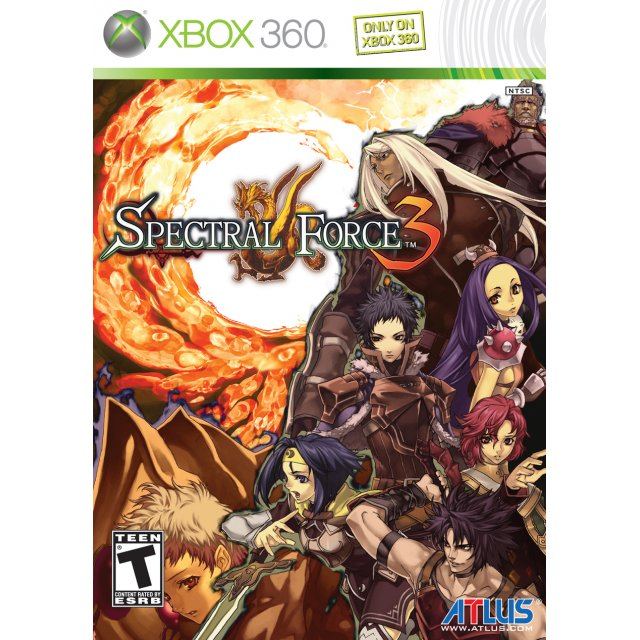 sold Out of print / Out of stock.
Manufacturer
Atlus
Compatible With Xbox360™ (X360)
Version

Magic Era: 996. The ten kingdoms of the land, seizing the opportunity provided by Overlord Janus's death, are attempting to unify the continent under their own banners. This is the beginning of the Great Neverland War. In order to bolster their defenses, kingdoms have begun hiring mercenary units. As new members of the Norius Mercenaries, you and your friend Diaz are eager to prove yourselves. When the squad’s commander Judo is mortally wounded in battle, the mantle of leadership is entrusted to you, and so the adventure begins…

If you are familiar with Spectral Force 3, why not let others know?

If you prefer good gameplay to good realisation, Spectral FOrce 3 is made for you.
dazh001 (76) on 31, Aug. 2009 19:13 (HKT)
For SJRPG fans only
If you're wondering what a SJRPG is then this is not a title for you. For those of you who are fans of the genre, you'll find a serviceable game with a decent combat system and strategic depth. The game does look dated, and the story is a bit thin, but given the bargain price it's available at, it's worth checking out if you want to add another SJRPG to your collection.
PuNiao (365) on 28, Sep. 2008 18:51 (HKT)
Spectral Force 3
Held up against titles like Infinite Undiscovery and the upcoming Fable 2, Spectral Force 3 lies squarely in the average category. Much of the beauty of the title lies in its non-linear approach. Players are in control of a mercenary group partaking in an all-out war among 10 different factions on the planet of Neverland. The game offers faction-specific characters, such as the mage, Kiratt, who is available only if players help to kill the Meimai faction in the game. Japanese role-playing fans will love the solid voice acting and piles of dialogue. Ranging from the gruff but friendly voice of mentor Judo to the sweetly innocent Little Snow, it's clear more time was spent by the creators on conversations than other parts of the game. Everyone will probably appreciate the streamlined combat system, though. The turn-based system maps different buttons to the 360's controller. They correspond to attacks such as light, medium or heavy and are a great alternative to old methods of trawling through menus for attacks to use.

As characters lose health and get closer to death, their attacks become increasingly powerful - to signal their will to hang on to life. However, this leads to ridiculous fights in which a single lucky character can rampage through forces - either yours or the enemy's. It is unfortunate that the game relies on this one-trick pony. The only real way to win is to rely on such death blows. Spectral Force 3 is almost not the most graphically impressive title around. Played on a large, high-definition screen, the backdrops and battle animation look dated. There are also many typos in the speeches and menus. The hefty price tag serves only to break the deal. If you're looking to waste some time and can overlook dated graphics and bad spelling, go for it.