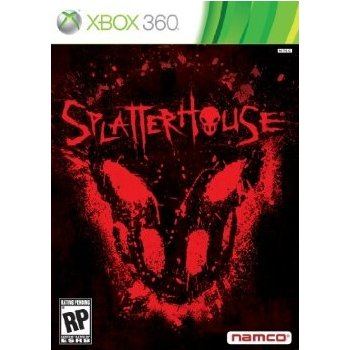 
Click on a thumbnail to see more pictures for Splatterhouse

Follow Rick and his mystical Terror Mask as he unmercifully tears, cuts and beats his way through denizens of unearthly creatures in an epic adventure to rescue his girlfriend from the clutches of deranged occult figure Dr. West. Embodying the unfiltered, primal aggression of its namesake, Splatterhouse combines visceral, adrenaline-soaked combat with horror elements to deliver an original gaming experience that defies the boundaries of the traditional action category with over the-top gore and shocking new gameplay mechanics.

If you are familiar with Splatterhouse, why not let others know?

jayvgames (13) on 06, Jan. 2018 13:18 (HKT)
BRUTAL!!!
Good God! This game is a full on gore fest and does things no human could ever do upon another! I love it!! You play as Rick Taylor. A scrawny boyfriend who basically looked like he took a few wedgies in high school. Rick tags along with his girlfriend named Jennifer Willis in a interview with a professor of necrobiology named Dr. Henry West. Rick had this idea to ask her for her hand in marriage when they arrive but are rudely interrupted by experimental monsters of the "good" doctor and Jennifer ends up being abducted while Rick is on the verge of death due to his wounds. But as fate would have it, Rick is clumsy when he is struck and mortally wounded because he broke a sarcophagus that contained a sentient mask known as the Terror Mask, which is one of the best dark humor characters I've ever seen or played as besides Deadpool. He calls out to Rick and bargains with him. The deal is if he puts the mask on, the mask will restore Rick, and then some, and can help save Jennifer. With very little choice, Rick places the mask on, becomes a giant hulk like monster, while still retaining his consciousness, and teams up with the mask to go and save Jennifer. With the story premise out of the way, lets get to gameplay. It's absolutely, horrifyingly, awesome! The guts, the gore, the dismemberment is disgusting yet artistic! The idea of restoration is awesome! It's like if Deadpool was contracted to take on Mephisto and Blackheart. The Terror Mask is the highlight of the duo with funny jokes, poking humor at Rick, and even the excitement he feels with the blood and carnage! It actually made me excited, which is kind of messed up but it's not humans you're dismembering anyways so you're pretty much safe with that. The game switches between 2D platforming and 3D hack n' slash where you can simply use your fists, your dismembered arm if you get it cut off, heads of your enemies, arms of your enemies, machetes, baseball bats, guns, and so much more! When you build enough blood points, you can use it to transform into an even bigger hulk like creature decked in spikes, long sword like claws similar to Baraka in Mortal Kombat, or when in normal form when you beat up an enemy long enough, you can do a finisher on each of your enemies with a tad of button mashing or using your analog sticks. It's beyond good! A worthy remake of a classic! However, the only thing I can say I don't like is what I said earlier, your own arm being cut off from an enemy. It's because you can't do any sweet combos but rather feel like your playing a dumbed down version of Rock 'em Sock 'em Robots. Other than those instances, it's a smooth game that's addicting, filled with gore, and awesome metal tracks from bands like Lamb of God, Five Finger Death Punch, and Mastadon. I personally would've preferred they didn't stay safe with bands like that and played bands like The Black Dahlia Murder, Thy Art is Murder, or even Decrepit Birth. Whichever port you get, you will be receiving one hell of a hidden gem in gaming. Thanks for reading my review and have a good one!
stevenrsvl (354) on 06, Sep. 2012 09:34 (HKT)
Old Skool to New Skool
Price and GOW gamestyle makes it a nice playthrough!
erikqkh (1280) on 21, Aug. 2012 03:04 (HKT)
Cool
Highly entertained!
dideyes (17) on 28, Nov. 2011 19:00 (HKT)
Splatterhouse
Have fun playing.
williamrjun (124) on 13, May. 2011 18:26 (HKT)
Blood everywere is so cool !!!
This game is pure fun. period! And the extras are amazing - finish the game and you unlock all the 3 splatterhouse previous games.
1 »