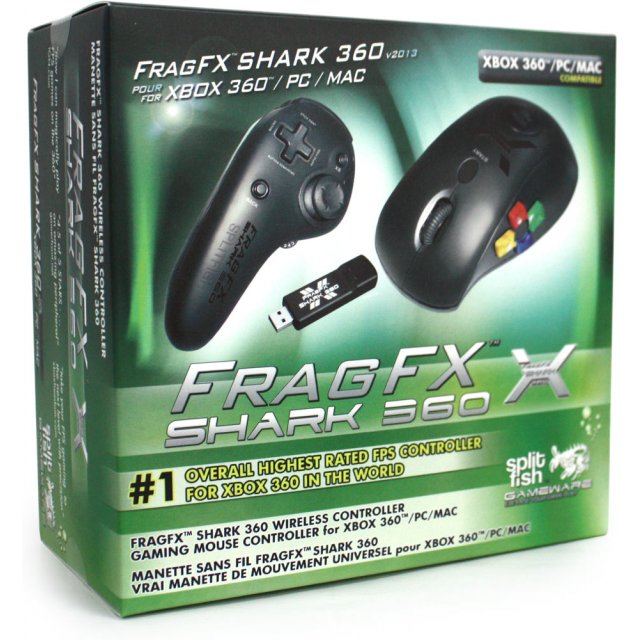 The FRAGFX SHARK 360 is a significant step forward for the console gaming industry because it not only provides an almost perfect PC mouselike FPS experience for gamers on the XBOX 360, but also provides an easy to adopt, high end, fully programmable analog stick counterpart that make it possible for hardcore PC FPS fans to enjoy their favorite shooters on XBOX 360, MAC or PC.The Splitfish FRAGFX SHARK 360 lets you play FPS games on a console the way the were originally meant to be played - PLUS MUCH MORE. With the FRAGFX SHARK 360 you can intuitively aim with a mouse and adjust sensitivity on the fly as well as use advance functions like button remapping, turbo, wrist flick melee and much more with ease. The FRAGFX SHARK 360 is optimized for FPS shooters, but also has all the functions of a regular XBOX 360 controller - so it can be used for all games. Gamers do not have to go through complex procedures for button mapping or sensitivity adjustments, The FRAGFX SHARK 360 is designed for simple and intuitive on the fly customization. Also, just like it's brother, the FRAGFX SHARK, the FRAGFX SHARK 360 has an uber long battery life of 50 hours of gameplay and 500 hours of standby on 2 AA batteries.

If you are familiar with SplitFish FragFX Shark Controller Xbox360 (New Version), why not let others know?