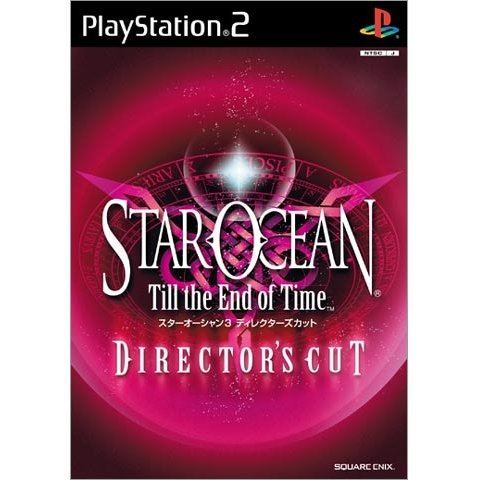 sold Out of print / Out of stock.
Manufacturer
Square Enix
Compatible With PlayStation 2™ (PS2™)
Version

Star Ocean 3 Director's Cut features additional dungeons and characters. There is a cew characters called Mirage Coast, as NPC in the original version, now she is fully playable. There is also a new Versus Mode, allow players to battle with their favorite characters, new costumes can be obtained from the Versus Mode.

If you are familiar with Star Ocean 3 Director's Cut, why not let others know?

First off, the combat in this game is very fast and fluid. Everything runs so smoothly despite all the action on screen. As you run around, attack, and open menus, the smoothness of the battles allows you to immerse yourself in the pacing.

Everything is accented by Motoi Sakuraba. Fans of the Tales series will easily recognize the style of tunes, even down to the end battle fanfare. I thoroughly enjoyed the music in this one.

As I said, the game is very solid. There is much to be enjoyed here, both in content and quality. I recommend this game.
Rin on 06, Apr. 2005 22:24 (HKT)
Star Ocean Until the end of time, the Honest Review
Star Ocean 3 till the end of time

I Bought this game upon release, but noticed this area lacked an honest review

as you are all aware, this game is produced by Tri-Ace, and published by Square-Enix, it is on 2 discs and contains extras not included in the origional game

for an RPG game i found this game incredibly absorbing, once you start playing you wont want to stop, you\"l start to notice all the breath taking elements that make this one of the greatest playstation RPG\"s ever made, the atmosphere, the enviroment, all seem perfect

Graphics: the graphics remain solid throughout the game, was some fantastically real time rendered cutscenes, with impressive detail despite the location, at some points im amazed the Playstation 2 could handle such beauty

FMV: Most of this games FMV is in real time, with very few lavish cutscenes, but when they do appear you\"l be happy their there

Music: the music is suitable for each enviroment, i would say theres around 40 different tracks for all the different locations combined, i found the battle music incredibly addicting

Content: the game remains consistant throughout, despite the major surprise everyone saw on disc 2 the story remains solid and i doubt you\"l be bored at all

Personal Opinion: the game has so much extras and content you\"l be happy youve speant your money on this game, for one theres a VS mode, but i would like to get into the Invention system

Invention System: the invention system in this game is just awesome, theres around 20 people to recruit to join your team of inventers all around the game world, you can place them in different locations and give them orders via a communicator, as different inventors create items, new shops appear around the world, selling weird and wonderfully unique Items.

Battle Areana: i will not say where this is since i dont want to spoil but you can fight 1 v 1, 2 v 2 etc against the computer to test your skills and win prizes

Extra Dungeons: around 2 that i know of, one of which contains ultimate weapons, and the other is 255 floors which holds powerful bosses

Conclusion: its a must have if you like RPGS