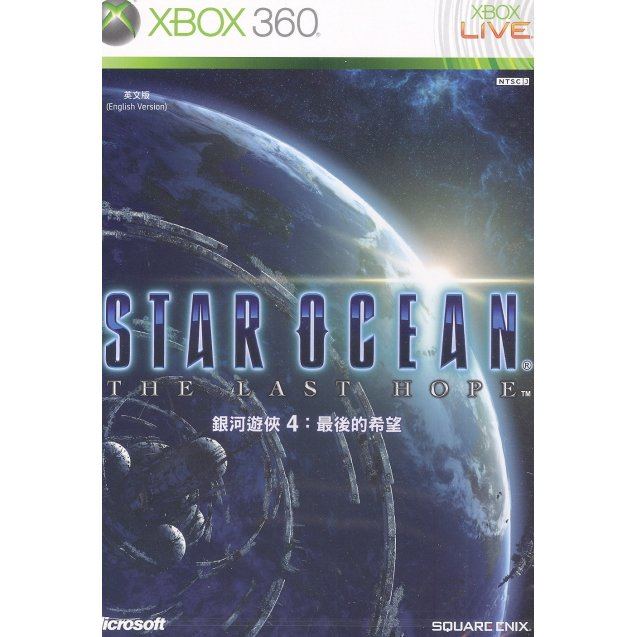 If you are familiar with Star Ocean: The Last Hope (English language Version), why not let others know?

thanapat_love (3) on 10, May. 2012 22:04 (HKT)
I want it
I want it so much Star Ocean: The Last Hope (English language Version) Asia NTS- J
[This review is based on another version of this product]
Flit (116) on 26, Aug. 2009 16:02 (HKT)
Japanese version>US version
The voices are better and it also has the cool anime faces when the speech boxes come up instead of the ugly looking CG renders of the characters. I still don’t understand why Square did this to the American version, they should have left the Japanese voices and the anime art in the US version. Import this one if you love RPG’S. It’s the best JRPG I’ve played on the 360.
[This review is based on another version of this product]
ktoombs (29) on 15, Apr. 2009 15:31 (HKT)
The best Square-Enix Title on Xbox 360
If you haven't played Star Ocean before then you may not know what to expect, if you have then you may have alreasy bought this game. The Last Hope is a real time JRPG. When you bump into an enemy on screen you enter a battle screen. There are some new improvements in batte (Compare to Star Ocean: Till the End of Time.) One is the Rush Gage and the other is Blindsight. After beating the game you have many things to do, harder dungeons/bosses, more quests, and the colleseum. I highly reccomend this to any JRPG fan.
[This review is based on another version of this product]
rth627 (23) on 28, Feb. 2009 15:28 (HKT)
Another great SO game
If SO:LH doesn't released for the PS3 in a year, I will buy an Xbox 360 then!