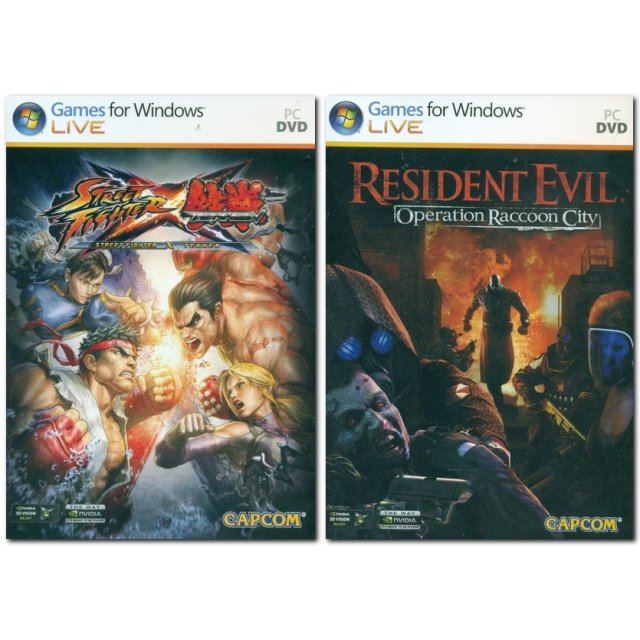 sold Out of print / Out of stock.
Manufacturer
Capcom
Compatible With Windows™ (PC)
Version

Street Fighter X Tekken: Are you ready to take on the strongest fighters in gaming history? In Capcom's newest project, Ryu and Ken and everyone in Street Fighter will clash with the Tekken cast. Very little is known about the game at the moment, but this title will use Street Fighter IV's high speed 2D fighting system, and features 3D graphics. Form a 2 against 2 tag team. When one of your character attacks, the other can support. Cooperate with each other to launch chain attacks and sure kills. Knock out your opponents and punch them until you K.O them. Resident Evil: Operation Raccoon City: Resident Evil™: Operation Raccoon City, a collaboration between Capcom and Vancouver based studio Slant 6 Games, is scheduled for release this Winter. This latest offering will take the series in a completely new direction and offer a style of gameplay yet to be seen from the franchise. Resident Evil: Operation Raccoon City delivers a true third person team based shooter experience set within the dark and sinister Resident Evil™ universe. The setting of the Resident Evil universe not only provides a rich backdrop to the action but delivers a unique and thrilling triple threat battle. Zombies and Bio-Organic Weapons (B.O.W’s) add to the mix as players not only compete against their team’s opposing squad but also tackle this third unpredictable element that could only exist in the twisted Resident Evil universe, creating a brand new style of gameplay and breaking the conventions of traditional team based shooters. It is September 1998 and the action centres on the ill-fated Raccoon City and the horrifi c consequences of the deadly T-virus outbreak. With a cover up required, Umbrella orders an elite team into Raccoon City to destroy all evidence of the outbreak and eliminate any survivors. Meanwhile the US Government has quarantined the city and dispatched its own team of elite soldiers to determine the source of the mysterious outbreak. Players take on the role of an Umbrella Security Service soldier (U.S.S.), competing alone or in up to four player co-op in a battle against all the competing forces at play in Raccoon City.