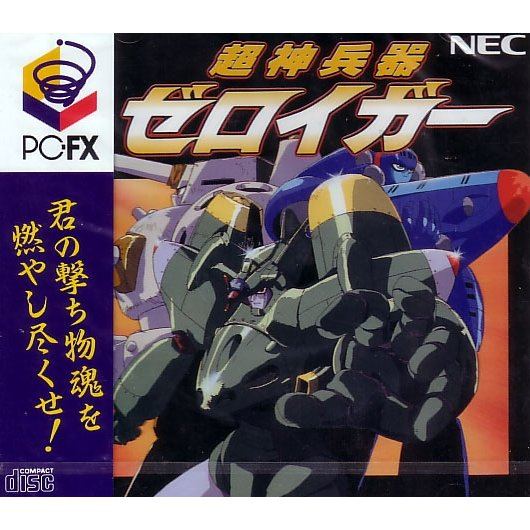 The Galactic Emperor Zemu is conquering one planet after the other, planning to expand his empire to the known limits of the galaxy. The reason for his success are huge robots who fight in his armies, developed with the technology invented by the genius scientist Dr. Lulu. But the doctor understands herself that her inventions have caused misery and destruction to other nations. She runs away, taking design plans for the giant robots with her. She arrives on the Earth ( Japan, to be exact) shortly after World War II, and with the help of local scientists, develops a powerful robot, that alone can protect Earth from Zemu's attacks: Super God Trooper Zeroigar!

Zeroigar is the only shooter for the PC-FX system, continuing the legacy of vertically scrolling shooters from the PC Engine (TurboGrafx) era. The player controls Zeroigar as a plane and as a robot (for boss battles). As in most shooters, power-ups appear frequently. Every level starts with the default weapon, which can be enhanced with these power-ups. Secondary weapons (bombs, torpedoes, etc.) can also be found. A somewhat unusual feature of "Zeroigar" is its leveling-up system. The player is awarded experience points, depending on his performance during a stage. After completing a stage (or after a Game Over screen), the player is able to use those points to increase Zeroigar's parameters (health, defense, weapon power, etc.). The player is given unlimited continues, but he has to begin the level from the first screen each time. Anime-style movies advance the story between levels.

No reviews for Super God Trooper Zeroigar yet.