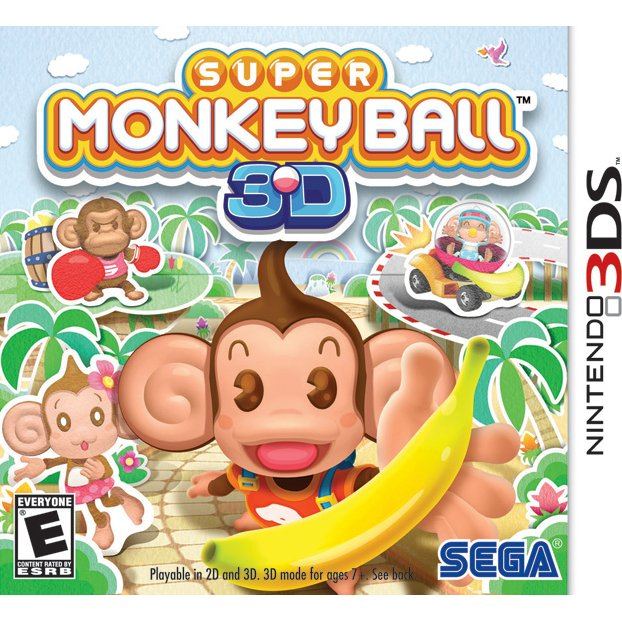 Sega
Rated
By Our Customers
Compatible with Nintendo 3DS™ (3DS)
For US/Canada systems.

NTSC
1w Expected stock arrival within 1 week.
US$31.99
Lunar New Year Sale
Limited time offer - Secure yours now before the offer expires!
Our previous price:US$ 44.40
You save: US$ 12.41( 28% )
Manufacturer
Sega
Rated By Our Customers
Compatible With Nintendo 3DS™ (3DS)
Version

Super Monkey Ball as you've never experienced before! Join AiAi and friends as you tilt and roll your way in to the world of 3D! Lose yourself in each vibrant world as you twist, turn and aim to collect every banana in the fastest time possible. Then play together with friends and be the first to cross the finish line in Monkey Race or get ready for a manic melee in Monkey Fight. Everyone's favorite monkeys are jumping out of the screen with excitement. Are you ready to join the fun!?

If you are familiar with Super Monkey Ball 3D, why not let others know?

jingprison (143) on 04, Apr. 2012 09:28 (HKT)
This game is good
Super Monkey Ball 3D IS Great game
[This review is based on another version of this product]
fienix (6) on 21, Sep. 2011 03:30 (HKT)
OK game
This game is fun if you're bored, but it's really short.
Exlon (8) on 08, Jul. 2011 09:22 (HKT)
Eh...
I had high hopes for this game, being the sort of game that I thought I'd like. The graphics are good, lots of bright colors, fun environments, and I remembered playing Marble Madness on my brother's old laptop (I was quite addicted). However, there aren't many worlds in this game, and getting through the 10 levels per world isn't all that difficult. There isn't much in the way of replay value. If something was so easy, why the heck would I want to run through it again? Don't get me wrong, it's fun little game for every now and then--I just wouldn't pay $40 for it. $25-$30 maybe? But not $40...
RupeeClock (51) on 02, Jul. 2011 17:26 (HKT)
A very regrettable purchase
The gamecube original titles were some of the most frustrating, challenging and satisfying arcade games produces in the series, with long spanning levels with pulleys, lifts, moving platforms, twists, turns and many numbers of mechanics designed solely to hurdle you into oblivion at hundreds of miles per hour.

This game has none of that. The level design, all 80 of them, are without challenge, without frustration, without satisfaction.

Using the analogue controls the game is a doddle to play, as you maneuver your way around the safety rails, slight slopes and rough patches or ground to reach an end goal for a relatively straight path, with no risky or rewarding options like razor thin paths.

Right to the very end of the game, you will be protected by safety rails, I kid you not.

The main game aside, the sub-games, being Monkey Fight and Monkey Race are very poorly implemented imitations of the renowned Mario Kart and Smash Bros series, with clunky controls and confusing elements.

The entire game can be cleared in a single sitting in little under two hours. I have to emphasise the total lack of challenge, frustration and satisfaction this game will offer. Do not buy this game.
[This review is based on another version of this product]
shadowstar123 (249) on 23, Mar. 2011 12:49 (HKT)
Great way to start the Nintendo3DS!!!
Super Monkey Ball 3D is a great, fun game. Unlike Super Monkey Ball 1 & 2 for Gamecube, this one is more like a series of zigzags and mazes which is OK. The soundtrack is fantastic. I actually ripped it after a week of having the game.

The story mode is just 8 worlds with 10 levels each including a bonus round on stage 5. So, 80 stages total. For a one player game, it is really short, but it is fun. The 3D is really cool. Things really pop out of the screen!

The kart game is pretty fun. I feel like the computers just cheat I guess. You could be doing well, but then end up in 8th place at the last second. It is like it tries to be Mario Kart, but isn't really Mario Kart. This is the best racing mode for Monkey Ball I think. You get items and everything. There are 3 worlds for it and 3 races each, so, 9 stages. It is fun. You get 16 characters and karts, 8 of which are unlockable for each.

The other mode is best described as Super Smash Brothers. If you know what Super Smash Brothers is, than that is really what this is. Beat up monkeys on a stage and knock them off. From what I understand, it is like coin match. The one with the most bananas wins.

Since no one else I know has a 3DS or this game, I can't say anything about the multiplayer mode. This game is really easy to navigate. You really need no Japanese knowledge. You basically need to know YES (HAI) and NO (IIE). This game also uses the motion sensor (you have to turn that mode on) to play this game by tilting the Nintendo3DS. It is cool, but definitely makes this game near impossible to play.