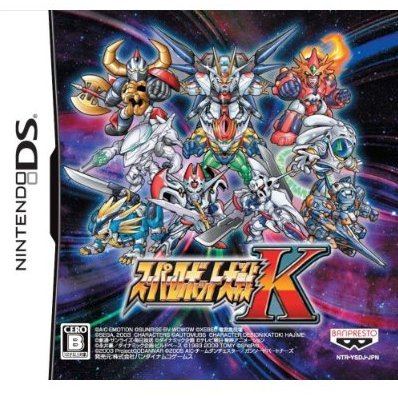 Banpresto
Rated
By Our Customers
Compatible with Nintendo DS™ (NDS™)

Works on all systems sold worldwide, a correct regional account may be required for online features.
24h In stock, usually ships within 24hrs.
US$31.99
Our previous price:US$ 49.99
You save: US$ 18.00( 36% )
Manufacturer
Banpresto
Rated By Our Customers
Compatible With Nintendo DS™ (NDS™)
Version

Works on all systems sold worldwide, a correct regional account may be required for online features.
24h In stock, usually ships within 24hrs
Price
US$31.99
Our previous price:
US$ 49.99
You save:
US$ 18.00( 36% )
Play-Asia.com Return & Refund Policy
Trustpilot
Trustpilot
Click on a thumbnail to see more pictures for Super Robot Taisen K

A large war is whipping the world into a whirlwind, destroying numerous planets and lives. Although civilization allowed people to live in cities scattered across the universe, violence never stopped.50 years ago, the demon queen led her invasion, and later came the virtual beasts. Both menaces were taken care of, however, the troubles with humans carries on.Science and technology allowed people to alter their off spring's genes. Coordinators are people who are genetically adjusted and seemed to have better physical or mental attributes than normal natural borns.The differences in abilities set the two types of people apart and grudges, as well as envy is the source of current strife.Each camp, the Naturals and the Coordinators, has their military force and war is about to start. Board your robot and get ready to enter battle. The mechas come from a multitude of series, from the relatively new classic Gundam Seed to King Geiner.

If you are familiar with Super Robot Taisen K, why not let others know?

timey84 (133) on 25, Mar. 2017 05:30 (HKT)
Nds srw 2nd installment
K got the nicest bgm. Like the original "active mind"
The mecha roster was still acceptable. To my preference.
Great thing is that they bring back partner system, more mecha can be used in battle. Improvement graphic on previous srw w.
Still a great srw game.
carlospenajr (95) on 23, Nov. 2013 08:40 (HKT)
A basic one...
It doesn't have much pros on it's favor, since it lack some nivel of previous SRW games, but even so you can enjoy the game play like any other game from the serie.
friar_mmx (2) on 03, Jun. 2013 07:56 (HKT)
Average at best
(+)Graphics are visibly improved from W.
(+)Includes several mecha series previously unseen in SRW, such as GunxSword and Zoids Genesis.
(+)Largely bug-free, rare among portable SRW's
(-)Original mecha designs are rather boring after what we got in W.
(-)Most of the game comes off as too easy, with only a few stumbling blocks along the way.
(-)Soundtrack is really hit or miss, and some of the theme selections don't feel fitting for battle.
(-)A little on the short side, with 46 levels overall. Several of these are two-parters.
(-)Way too much emphasis on the Gaiking plot - seems like almost half the game is devoted to that series alone. Get used to seeing the Darius enemies, they're everywhere.
(-)Easily the worst implementation of the squad system in any of these games, which not only wrecks expectations of the Support Attack/Defense system but also renders the Attack Combo skill brokenly powerful.

If you have to choose, get L or W instead; this is easily the weakest of the DS era SRW entries.
Ahmed Sameer (75) on 10, Nov. 2011 19:38 (HKT)
It's a Hard Game.
As I experience the SRT games one by one, they all seems to give the player a fair challenge, but not this game, SRT K is the hardest game I've played since SRT OG2, the graphics and sound are not better that SRT W, actually they are good, what makes K so hard is the crazy energy cost for the attacks, the strongest attacks costs over 100 EN and that is insane, also the attack range is so limited, attacks with medium strength (not the strongest attacks) mostly will have an attack range of 1, finally the idea of including Mazinger Z and not Great Mazinger, not having them both will not allow you to use the double burning fire attack, the partner system is new to this game and not done very well here, other than that the game is OK, this game is the real challenge for SRT fans.
chayfox (1) on 02, Sep. 2010 08:31 (HKT)
Fantastic game
The Super Robot Wars series never disappoints, and this game is no exception to that rule. With a nice variety of robots to choose from (including for the first time several great ones, such as Godannar), and a partner system that adds a lot of flexibility and fun to the battles, Super Robot Wars K is a great title in a long line of greats. Like most SRW games, much of what the player does and unlocks carries over to the next play through, so there's no reason not to give it that extra couple play throughs.
1 »