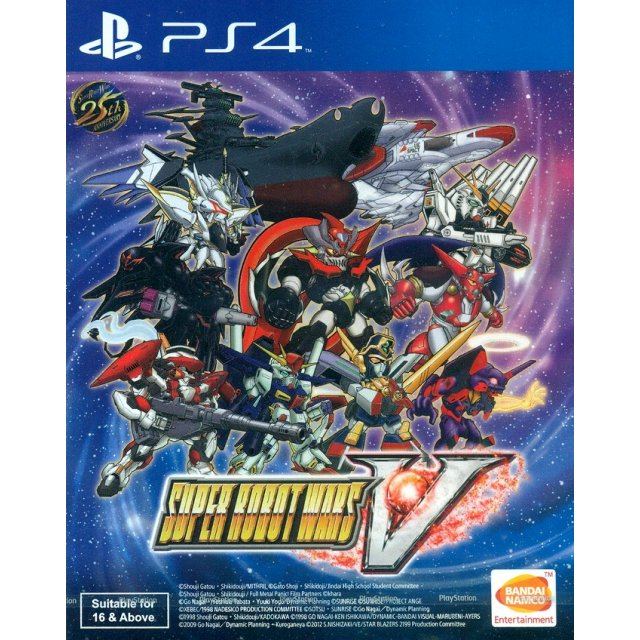 If you are familiar with Super Robot Wars V (English Subs), why not let others know?

Ryo Dragoon (2) on 19, Jan. 2020 03:14 (HKT)
A dream for mecha fans
Finally, after so many years surviving with fan translations and hacks, this series includes oficially a western language, and since the console doesnt has region lock, anybody can get it and enjoy in any part of the world.

Is not possible have a official release worldwide because licenses of the animes? No problem, just make extra stock and the people will import it directly from the source.
[This review is based on another version of this product]
mardunaki (1) on 04, Jan. 2020 20:05 (HKT)
ガンダム
this is my first Gundam game ever, and i'm gonna say this really cool, animation and music bring me nostalgic memories which i never had)
[This review is based on another version of this product]
patrickwan1547 (1) on 20, Dec. 2019 00:45 (HKT)
Your mileage may vary
For me, an avid gundam fan since the early 2000's this brought back a large amount of nostalgia and I love it. However, If you don't enjoy Gundam this game might not be for you. The animations, while a lot better than previous games, still don't compare to SRW ones, the tactical combat isn't as good as Fire Emblem either. That said, if you love the gundam series in Cross rays this is a must buy.
[This review is based on another version of this product]
Jason De Athenrye (2) on 19, Dec. 2019 08:25 (HKT)
Grindy as all get out
Have been playing the G Gen games since F. This one is by far the longest, not through story wise but by just throwing waves of bodies at you constantly. Later end battles have a 100 plus enemies. So most battles end up take 2-3 hours of killing in 2 moves or less. Still a fun game and one of the top selling on steam in November.

About 500 suits in total, with very few variants. Which is awesome. Most games have 17 Zaku IIfs. Same suit different paint job. Some series counter act each other, making a variable game play rewarding.

English is always a plus.

-Jason De Athenrye.
[This review is based on another version of this product]
methedemon (1) on 01, Dec. 2019 21:35 (HKT)
Better than Genesis which was already amazing
I played SD Gundam Genesis and loved it, over 100 hours of time and never bored. So many stages and suites to use and the stages are actually challenging. Cross Rays has IMO better Gundam selection, 00, SEED and Wing are much more fun to use than the UC ones (or it's possible that I am just bored of the UC units). The animation and overall presentation has seen a nice improvement, although this is still very basic in terms of visuals compared to the standard PS4 game. Overall if you are fan of GUNDAM (especially the more recent ones like 00 and IBO) this is a must buy.
1 »