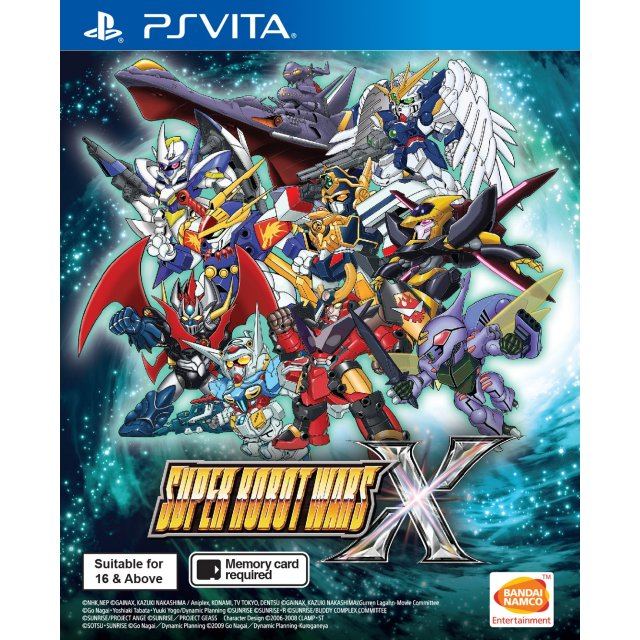 [This review is based on another version of this product]
That Scornshell Guy (1) on 28, Feb. 2020 19:37 (HKT)
Typical SRW romp, with some quality of life stuff
As my first "modern" SRW after playing the old ones on the Gameboy Advance, I'm finding this game pretty exciting. Takes a while to pick up the story, but I really like the character/mech roster so far. I understand that V might be better story wise from other reviews I've read, but I really don't see anything wrong with X.

Also, some of its source materials are apparently pretty unknown outside of its home region, so stumbling upon the absolutely hilarious "CONNECTIVE DIO - ACCEPTION" battle yell was an excellent experience :D
[This review is based on another version of this product]
jgrace91 (1) on 26, Feb. 2020 17:34 (HKT)
Great game
I love the SRW games and while the story for X i feel isnt as good as V's was the selection of pilots and mechs is absolutely fantastic. Almost always i had more characters that i wanted to use then could be brought onto any of the missions.
[This review is based on another version of this product]
Lunari (17) on 11, Feb. 2020 20:45 (HKT)
More Robot Wars!
Another great port of this excellent series. If you like the others, expect more of that great robot action. The variety of character is overwhelming, and anyone should be able to create a perfect team.
[This review is based on another version of this product]
Jedi Lord David (6) on 08, Feb. 2020 14:31 (HKT)
Another great Switch Port!!!
Absolutely love this series now that I'm getting into it and it is a must buy for the Switch! Remember if you have the code, you have to switch your account location and the Switch location to Hong Kong in order to redeem it, but that process is really easy! I love this game and everything that comes with it! It's not challenging for any beginner to get into and the action and combat are satisfying. It meets all of your mech needs, what more could you ask for???
[This review is based on another version of this product]
Ryo Dragoon (2) on 19, Jan. 2020 03:19 (HKT)
The best type of fan fiction
Is a great game like the usual in the series, but this one is a bit small compared with the other two from the trilogy.
1 »