Super Smash Bros. for Wii U
Nintendo
Compatible with Wii U™ (Wii U™) 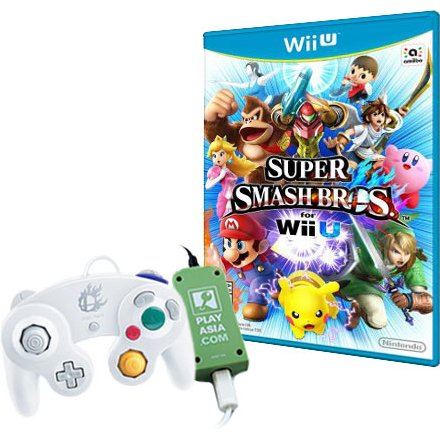 
Click on a thumbnail to see more pictures for Super Smash Bros. for Wii U with White GC Controller and Adapter (Play-Asia.com Bundle)

So what makes a controller originally released in 2001 so good? While not needed to enjoy Super Smash Bros. the GameCube controller has gained fandom for two main reasons: it was the default controller during the initial rise to popularity of Smash and the Wii-mote was so suboptimal that there was no contest. The GameCube controller's ergonomic design, button placement, and durability should keep it at the top of the pecking order, at least as far as Smash competitive is concerned.

The Play-Asia.com xMayflash Adaptor is a GameCube controller adaptor that allows you to play any of your favorite Wii/Wii U games, with as few restrictions as possible. With next to no input lag, a turbo setting,and compatibility with any game playable with theWii Classic Controller orWii Classic Controller Pro, the Mayflash is the best answer for those truly in love with the GameCube controller.

(Please note that the WaveBird is not a compatible)

If you are familiar with Super Smash Bros. for Wii U with White GC Controller and Adapter (Play-Asia.com Bundle), why not let others know?

In my opinion the game should begin whit only a few characters and unlock all the rest by diferents ways.. but the game start whit the 3/4 of the total number of characters.
The Mii option its great, you can create your own character to play whit.