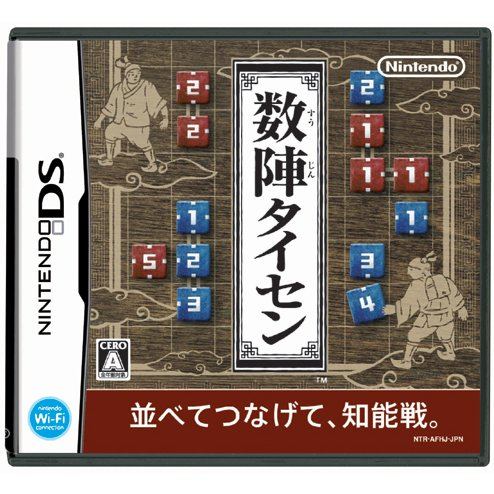 Works on all systems sold worldwide, a correct regional account may be required for online features.
1w Expected stock arrival within 1 week.
US$14.99
Our previous price:US$ 24.90
You save: US$ 9.91( 40% )
Manufacturer
Nintendo
Compatible With Nintendo DS™ (NDS™)
Version

Works on all systems sold worldwide, a correct regional account may be required for online features.
1w Expected stock arrival within 1 week
Price
US$14.99
Our previous price:
US$ 24.90
You save:
US$ 9.91( 40% )
Play-Asia.com Return & Refund Policy

Suujin Taisen is a board game featuring pieces that have both numbers and paths on them. The object is to position pieces on the board so that the paths join and the numbers create sequences. These combinations of pieces are called hands.Each piece has one of the numbers from 1 to 5 on it, as well as a path. The paths can be one-way (emerging from the central number and ending at one side of the piece), two-way (running from one side of the piece to another side, either straight through the middle or changing direction), three-way (a T junction) or four-way (a cross joining all four sides).There are four basic hand types, two for numbers and two for paths:Sequence Join: joining the paths of adjacent pieces so that the numbers run in order.Same Number Join: joining the paths of adjacent pieces with the same number.Enclosure Join: joining the paths of adjacent pieces so as to create a loop.Complete Join: joining paths so that both ends are terminated with a one-way path.Multiple combinations of hands (e.g. an enclosure join that also makes a sequence) score extra points.The controls are stylus-based. Each piece is first placed on the board by dragging it with the stylus, and then optionally rotated by tapping it.

Kaitou Wario the Seven / Wario: Master of Disguise
US$ 24.99

No reviews for Suujin Taisen yet.