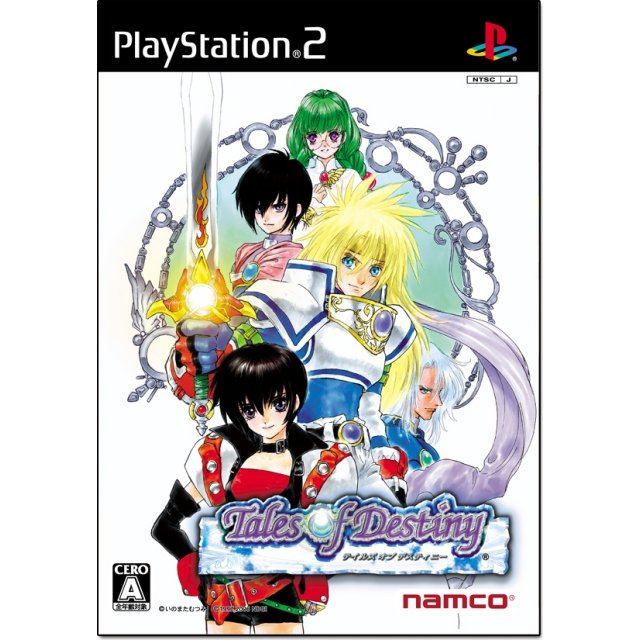 Tales of Destiny is a remake of the original PlayStation™ version, featuring new graphics, new techniques, new scenes, new skits and more, it's everything a remake should be.The game uses the AR-LMBS battle system, which allows for massive combos in mid-air, something never before seen in a Tales game. The characters all gain new techniques, some of which are from Tales of Destiny 2. Stahn and co have hi-ougis this time around, which look even more spectacular than those seen in previous Tales.Previously in Tales games, skits have just features talking character portraits with litte to no animation. Not any more. Say hello to the new "Emotional Card" system, which shows a character's full body during skits, with fluid animation adding a new dimention to skits, which could previously be tedious to watch.

If you are familiar with Tales of Destiny, why not let others know?

rancayan (1) on 01, Apr. 2007 09:32 (HKT)
This game is crazy
loved the game. was super hard. i played with my friend and we dominated... haha i dont even kno japanese and i still beat it. used a walkthrough tho... favorite game for ps2 so far
Lost Rider on 04, Mar. 2007 01:24 (HKT)
Best Tales game ever? Thats going a tad to far but its still an excellent remake.
Im going to make this short but sweet so listen up...
GOOD
> Much better than the oringial, improving on every aspect of it.
> Deeper, more interesting characters
> Completey altered script and some story changes.
> Bosses and some enemies are hard
> Revamped battle system that breathes new life into the Tales series.
> Detailed graphics and 2D spirites with more imagination than previous Tales games.
> Challenging puzzles
> Not as frustrating as the original
> Import friendly. Thats the best thing.
BAD
>Not as frustrating, but in certain areas you may be driven close to insanity. Like the original.
> The bit with the Aethersphere is still as boring as ever.
> The battle system can take some time to get used too. (Put your characters on Auto for one battle. You will cry when you see how skilled Stahn is compared to you.)
>Demands leveling up in certain areas, but this doesnt happen very often.
>Some enemies are really REALLY annoying.
IN CONCLUSION...
Its an amazing Tales game that will sit with your favourite games for ages and ages...but I still think Rebirth is the best tales game. But personal opinions aside, this is a huge leap forward for the Tales series and is worth your hard earned money.
K (1) on 07, Feb. 2007 05:43 (HKT)
The Definition of Remake.
This game is awesome beyond words. Hardly any loading times, lovable characters, and fast paced battles makes Tales of Destiny one of the best in the series ever. If you thought Tales of the Abyss\' battle system and difficulty was great, wait till you play this. I HIGHLY recommend this to anyone that is a fan of the Tales series.
seo3372 (3) on 15, Jan. 2007 16:40 (HKT)
This is What the REMAKE should be!!!
hey, i enjoyed this game more than 5 years ago by its original title in ps1(tales of destiny), and this is a remake and this is a remake to which other remakes must be compared. this is greatly advanced with graphics, voices of characters embedded in the game, and runs smoothly! buy now and enjoy it!
Audicarocca (8) on 25, Dec. 2006 23:43 (HKT)
Perhaps the best Tales yet.
Seriously. It looks and feels like Rebirth, save the fact that there is no trilinear battle system. AR-LMBS fighting is ridiculously fun. It\'s already much faster than ToD2, which says much. If you enjoy RPGs, Tales games, or just video games in general, this is worth your time. It\'s also very import friendly since you can go back and play the original. Heed my words, Tales of Destiny is brilliant. :)
1 »