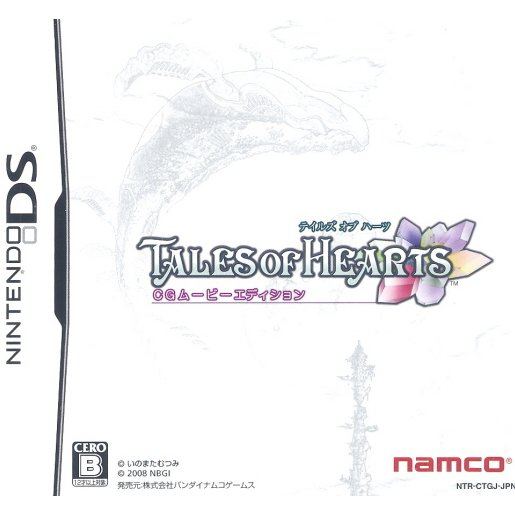 Works on all systems sold worldwide, a correct regional account may be required for online features.
24h In stock, usually ships within 24hrs.
US$19.99
Manufacturer
Bandai Entertainment
Rated By Our Customers
Compatible With Nintendo DS™ (NDS™)
Version

Works on all systems sold worldwide, a correct regional account may be required for online features.
24h In stock, usually ships within 24hrs
Price
US$19.99
Play-Asia.com Return & Refund Policy
Trustpilot
Trustpilot
Click on a thumbnail to see more pictures for Tales of Hearts (CG Movie Edition)

Under the twin moons and the rule of the great empire, people have been leading peaceful lives albeit unsettling legends about a sleeping princess, dream eating monsters and the falling moons continue to pass around.No matter how unsettling, people have been seeing these legends as mere stories to scare children, until the day a mysterious plague started spreading and the culprit of the illness seems to be the dream eating monsters. Under the onslaught of these evil forces, a special substance in people's hearts, spiria gets contaminated.The only thing to counter the monsters is Soma, hidden within the Spire Maze.All these strives of the land are unknown to the hero, Shing until he rescues a mysterious girl Kohaku from the monsters. Together, the two set off to find the mysterious substance Soma, save the land and find out the truth about the legends.

If you are familiar with Tales of Hearts (CG Movie Edition), why not let others know?

[This review is based on another version of this product]
reyjrt (28) on 13, Oct. 2012 12:06 (HKT)
Great RPG for the DS
This RPG is one the of the best for the NintendoDS and it is a must have for the fans of the genre. Though there is a lot of Japanese text to be read, non-Japanese speakers should not be disappointed as the overall layout of the game is pretty much a basic setup for a typical RPG, with the exception of the skills menu.
The story is great and the graphics is gorgeous.
Overall, I recommend this game for those looking for a good buy for the DS.
A+
[This review is based on another version of this product]
_KLando (20) on 28, Sep. 2012 15:45 (HKT)
Underrated but awesome game!
Don't stray away from the game simply because it's a DS game. It has one of the best stories in the series as well as very good gameplay, reminiscent of Tales of Destiny R. Very recommended.
[This review is based on another version of this product]
andrescapo_ (177) on 12, Sep. 2012 09:16 (HKT)
A nice portable Tales game
Tales of Hearts goes back to a 2D battle system like in Tales of Destiny for PS2, with quick moves and aerial combos.

It has an interesting story and nice character designs. The battle use something similar to Tales of Destiny CC, its called EG and allows the player to chain artes till it runs out allowing for easy combos. By the end of the game you can pull off extremelly long strings of artes.

I got the Anime Version simply because it represents Tales much better, and the cover of the CG version is just horrible.
ajbeute (5) on 19, Feb. 2012 09:38 (HKT)
One of Best Games in the Series!
Don't let the bland cover art and CG style movies scare you away! This is one of the best "Tales" game I've played. The battle system is similar to Tales of Destiny Remake on the PS2. It also has an addictive weapon building system called "Soma Evolve".

Also, in regards to the in game art, other than the cutscenes, the rest of the game uses the anime style art from the other version.
[This review is based on another version of this product]
penguinegg (63) on 22, Sep. 2011 13:27 (HKT)
Started out skeptical...
I admit when I initially heard about this game, I was skeptical. I felt it might be a little awkward to play a fast-paced series like Tales on the DS, but I was pleasantly surprised.

The formula we've come to know and love holds up well. The battles are action paced and the story and characters are entertaining.

I definitely recommend this game. Which version you pick up is up to you, but since the series has always held a 2D anime style, I naturally gravitated towards the anime version.
1 »