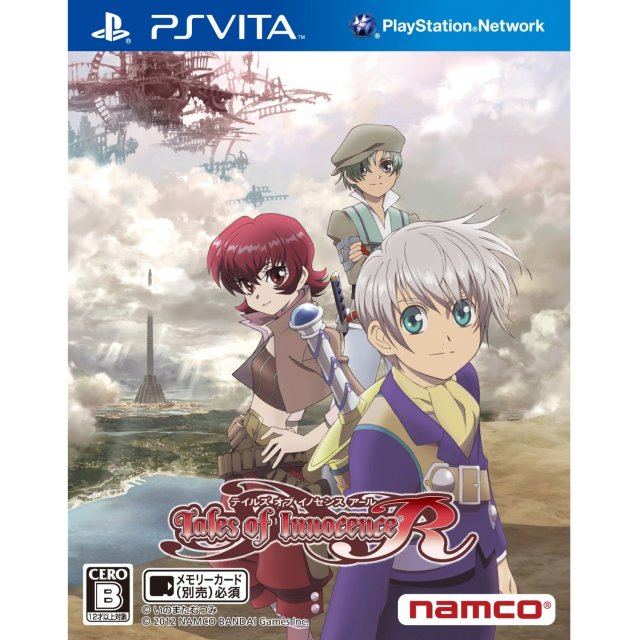 Embark on a journey to Innocence again on your PlayStation Vita. The revival of the Nintendo DS classic is stunning, the colors are vibrant and the animations are much smoother. The new game uses the DI LMBS battle system that reflects the gamer's style and skills directly. String combos together and fight intuitively. The touch pad allows gamers to set special skills so they can execute it with one touch. There is a new character KyuKyu, a self proclaimed archaeologist. See how she adds to the story and what edge she offers during the battles. All scenes in the main scenarios are voiced and Kokia, the singer who performs the theme song of Tales of Innocence is back to write a new song for the game's revival.

If you are familiar with Tales of Innocence R, why not let others know?

[This review is based on another version of this product]
Lemon (6) on 11, Sep. 2016 10:02 (HKT)
excellent remake
Having played both versions, this is definitely a remake worthy of a go even for people who played the original. The whole world has been revitalized with enough new material to be enjoyable for those who already know the story, and definitely missing nothing for those who are picking up innocence for the first time.
[This review is based on another version of this product]
ashton.wright (1) on 23, Jan. 2014 07:10 (HKT)
No title
Played the original DS version and enjoyed it very much, just received this version today and played for only for a few hours but I am enjoying this more, with the new addition and game tweaks, its a very involving game.
Illusion-E13 (10) on 05, Jan. 2014 17:53 (HKT)
Better version, more contents. A must get for Tales series fans.
Q1:What can you expect from this game?
A whole new adventure with more contents and 2 new characters.
Q2:Is knowing Japanese necessary to advance in the game?
- Learn Kana (Hiragana/Katakana)
- Learn Kanji for directions.
Q3:Is this enough?
No, but as long as you are an anime fan and watch a lot of undubbed animes, you should have acquired by now the hearing skills that helps you to know words meaning.
OK, Is it worth to play?
Yes, it is. Well, to be frank, as long as you are a Tales series fan, I think you will like the game. If not, well, you "might" like the game. To me, I like the cast of the characters, battle system and the interactions between the characters.

Tales series is one of my favorite series, but, I don't think it deserve 5 stars, well, that's my opinion.

- The lack of voice for "numbers" of skits.
- The introduction of the two new characters is good, but, they somehow didn't fit them in like the other characters. "bear in mind, that I still didn't finish the game yet. But I'm close to"
- That is just a person view, but I hated the random encounters, it would have been better if the monster are shown in the field just like the recent tales games.

- The rewritten story gives even more depths to the already-lovable cast. QQ and Kongwai - the two new characters - surprisingly fit the entirety of the story well.
- Graphics are not as bad as people said. It could be better, true, but they nonetheless fit the game's mood well.
- More challenging battles, complete with new BGMs! The game uses random encounters instead of having you run into visible, pre-existing opponents in field though.
- Most of the story-related lines are voiced. Unfortunately, only around a third of the skits are also voiced.

TOI is one of my favorite Tales entries due to its somewhat down-to-earth nature, and TOI-R cements the entry as my MOST favorite now. Provided you have a bit of understanding in Japanese (and a dictionary handy, if you're willing enough), I am sure this is one of Tales games you can truly enjoy. :)
1 »