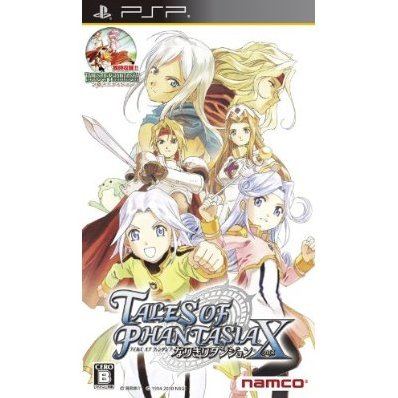 Click on a thumbnail to see more pictures for Tales of Phantasia: Narikiri Dungeon X

The lone fairy Etos wandered around the world, in search for his friends. However, after long long time of journeying, still, none of his friends were to be found.And slowly, the fairy lost his power. Appearing before the weakening fairy was a mysterious woman named Norun. In return for her nursing and kindness, Etos took over the responsibility of her two charges Duos and Meru as a surrogate parent.Life was peaceful, Etos was a wonderful parent figure if not over-protective. However, one day, when the children reached 13, Norun's messenger appeared to inform Etos that the two children are born with the power of Narikiri- they are people who acquire skills just by dressing in the costumes of a certain job class.Become one of the children and use your powers to help others and adventure in this great big world. Besides the Narikiri game, the disc also comes with Tales of Phantasia X edition - a re-release of the 2006 portable version with an updated battle system.

If you are familiar with Tales of Phantasia: Narikiri Dungeon X, why not let others know?

peter.ppatrici (153) on 16, Jun. 2012 14:00 (HKT)
A really great tales game
One of the best portable tales game and this disc even comes with tales of phatasia X edition a re-release with updated battle system apart from the narikiri game. Thus, it's actually 2 games for the price of 1. Definitely not to be missed by tales fans
ricardoramirez (175) on 28, Feb. 2012 00:16 (HKT)
2 in 1 of Good Titles
Not only does it feature a full game it also adds Tales of Phantasia, an amazing RPG, to the mix.
WingedHao (46) on 26, Aug. 2011 20:04 (HKT)
Another Gem
Great game and UMD also included Tales of Phantasia full voiced edition with enhanced gameplay and graphics. Recommend to any Phantasia fans.
trunions (151) on 28, Jun. 2011 05:19 (HKT)
Another great tales of game
A great game that compliments the original tales of phantasia so well.
Meteoryite (45) on 08, May. 2011 13:10 (HKT)
Greatest Mix Ever
You get The newly edited tales of Phantasia X and the sequal to the game. This is one supreme package.
1 »