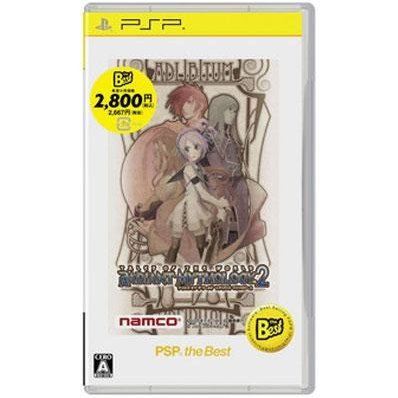 Tales of The World: Radiant Mythology 2 (PSP the Best)

Works on all systems sold worldwide, a correct regional account may be required for online features.
1w Expected stock arrival within 1 week.
US$33.99
Our previous price:US$ 43.99
You save: US$ 10.00( 23% )
Manufacturer
Bandai Namco Games
Rated By Our Customers
1w Expected stock arrival within 1 week
Price
US$33.99
Our previous price:
US$ 43.99
You save:
US$ 10.00( 23% )
Play-Asia.com Return & Refund Policy
Click on a thumbnail to see more pictures for Tales of The World: Radiant Mythology 2 (PSP the Best)

Adventure with Kanono again, this time on the ship Vaneldia. Explore the world and tell your own tale. Immensely popular is the first game that the developers decided to carry on with the myths.

Besides your character's gender, hair and eye color, smaller aspects such as the shape of the mouth and winning poses can be decided by you, design your ideal character and join the guild. The savory elements such as the battle arena remains. Challenge bosses, or multiples of them in one go or face off with all the powerful characters you have met in the Tales of franchise.

Hack and slash is coupled with magic, depending on your job choice, decide on the best way to take an opponent down. Collect GP points and upgrade your jobs to launch more powerful attacks, proceed with the plot to fill out the shops on Vaneldia and collect rare elements.

One of the attractions of the Tales of franchise is their enchanting characters, and in this huge party, you get to meet more than 50 of them in one go. This is your invitation, come join now.

If you are familiar with Tales of The World: Radiant Mythology 2 (PSP the Best), why not let others know?

Raztokk (7) on 11, Oct. 2012 03:19 (HKT)
Great price for a deep RPG
With Radiant Mythology 3 available, one would ask, "Why should I even bother with Radiant Mythology 2?" Simply, the music and subtle differences still make it a worthy purchase, especially at the price point being offered as of this writing. Several music tracks such as the battle themes remain exclusive to this game, as well as a more catchy and entertaining opening, Fly Away. Small aesthetics that I found personally more pleasing were Menu borders and designs, as well as horizontal cut-ins for Mystic Artes, which I find better than full body cut-ins as seen in recent Tales titles.

However, should this be your first run in with Tales of the World, a crossover series of many characters from namco's own Tales franchise, this game is the second in a series of three games for the PSP, the Radiant Mythology series. It plays like a typical dungeon crawler, but reverts to an Action-RPG style of gameplay when entering battles, similar to Star Ocean games, if you've played any of those. It also features character customization for your player character. so you can pick and choose hair and clothing styles, voice and gender, and other things. This title features improvements and more additions than the first Radiant Mythology, such as more characters to select from Tales series to aid you in battle, which means more skits (conversations between members of your party), more items, a larger soundtrack spanning several Tales games and a host of other changes. For its price, it is a good deal, a deep dungeon crawler with plenty of content to keep you going, even sporting a New Game + option, so you can keep your save file and go on to your next playthrough.
bra_no_mess (1) on 31, Jan. 2012 19:46 (HKT)
Very Good!
I love crossover from own companies, like Namco does. Tales of the World 2 is very good and fun to play.
nightmarezro (19) on 05, Jun. 2011 11:29 (HKT)
Awesome Gane
The game is great and if you played RM1 you will like RM2. Lots of Tales characters to choose from and all have their own unique style. One of my favorite RPGs on the PSP.
jasa_order (451) on 18, Mar. 2011 10:25 (HKT)
One of my favorite RPG game on PSP.
game (63) on 08, Mar. 2011 14:21 (HKT)
Tales of Tales 2
After having played the original Radiant Mythology, I was quite eager to try this one. And just like the prior release, while the game doesn't quite feel as polished as games in the main Tales series, probably most people who enjoy Tales games will enjoy this one. Everything from the gameplay to music will make Tales fans feel right at home, and especially being able to see your favorite characters is a nice addition.

The battle gameplay is mostly the same as the original Radiant Mythology, which was quite similar to Tales of the Abyss. And that's definitely not a bad thing, because I really enjoyed that battle system even if Free Running made things a little easier. For a portable game, it's pretty impressive that a game can handle the battle system so well. While I suppose it is just a tad bit slower than Tales of the Abyss, everything is still quite fast-paced.

The graphics are equally as impressive. For the most part, the art style is similar to Tales of the Abyss and the first Radiant Mythology. And while the graphics aren't exactly up to the level as Abyss, they are still very pleasing to look at.

As for the sound, Tales fans will definitely enjoy the music selection. A lot of the tracks are from past Tales games, so many fans can expect to get a satisfying feeling of nostalgia. Many voice actors also return in their respective rolls so that is also likely to please fans.

While it seems like I may be criticizing this game for not being up to par with other Tales games, that is really just me being nit picky. It really is quite a solid game and I found myself enjoying it all the way through. Tales fans will definitely want to look into this one.
1 »