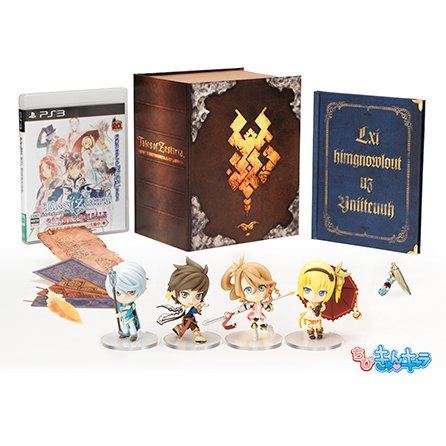 sold Out of print / Out of stock.
Please take note that, once purchased, this item must be paid immediately and cannot be cancelled or returned.
Manufacturer
Bandai Entertainment
Rated By Our Customers
Compatible With PlayStation 3™ (PS3™)
Version

Celebrating the 20th Anniversary of the Tales Of series, Bandai Namco is preparing the world for Tales of Zestiria, the 15th mothership title!

As this famous franchise continues to move forward, Zestiria takes a nod at the past by returning to the high fantasy roots of first Tales of games, and will forge new ground while keeping many classic elements that fans have seen over the years. It is quite possible that this title may potentially be the most robust and established Tales of title yet!

Zestiria takes place on the continent of Greenwood, and is divided between two warring empires. The story follows Sorey, a passionate young man empowered by a mystical race known as the Tenzoku - aka "Heavenly People." With their help, Sorey travels to free Greenwood. Like all Tales Of games, there is always an underlying theme; this time it is about "Sekai o tentō jōnetsu" - lighting the world with passion!

Baba-San and the Zest for Exploration and Adventure:

A huge departure from the previous Tales of games, Zestiria will be the first of the titles to have an open world-style layout; this dramatic shift is due to Producer Hideo Baba's desire to change the direction of exploration - as in previous titles, he compared this to "moving along a highway."

During exploration in the vast new world of Greenwood, players can access new areas with companion specific powers such as slicking through minor obstacles, smashing through large obstacles, stealth style gameplay, teleportation, and even interacting with lights and the environement. As well, depending on which character is selected to accompany Sorey, specfic skits and story-relevant conversations can happen; it goes without saying that all skits are done with full voice work and all characters on the map will have full-body representation once again.

For the first time ever, the famous real-time battle system of the Tales of games also receives an update; players will now engage enemies on the map, as opposed to the previous field to battle scene style of other titles. As such, strategic thinking will be important, as the environment has been mentioned to affect the results of battle.

Battles will take place with a maximum of four party members against a denizen of foes, and if things get too overwhelming, there is a new ability in which human characters can fuse with the Tenzoku, producing a hybrid form with new abilities and stats, depending on the combination.

Aside from the experience of Team Leader Hideo Baba, other big industry names who are working on this project are Kosuke Fujishima, Mutsumi Inomata and Diago Okumura for character and art design, Tatsuro Udo battle programmer who worked on Tales of Graces, Ufotable for the anime cutscenes, and co-composed music by Go Shiina and Motoi Sakuraba, both of whom are musical staples for many famous games. What's most exciting is that all of these are veterans to the Tales Of series, and this reunion forms a dream team for Tales of fans.

Stay tuned for more as we all discover new facts about this venerable series, as at Play-Asia.com, we are fans too!

If you are familiar with Tales of Zestiria [Limited Edition] (Japanese), why not let others know?

[This review is based on another version of this product]
TNinja (30) on 31, Jan. 2017 02:50 (HKT)
A Fine RPG From the Tales
The game has it's critiq. Understandable, but somewhat also rather unfair.

The combat of the game is pretty good. Fluid and easy to get into. But later, you'll start to deal with elements and are eventually forced to use every character in the game to advance. The classic 4-player co-op is essentially been reduced to 2-player, as there is a fusion feature in the game.
The 3D movement functions pretty well, though, making the combat manageable.

The equipment system has become quite complex, and turned into a puzzle game of it's own.


The story, is pretty fine. But the character choices that comes with the story is what made people rather angry. You'll be losing a character for good beyond half the game, and will return for a short moment near the end just to dissappear again.

All in all. For a Tales game, personally I would consider it the best in line, but I will still question the choices they made for the game.
[This review is based on another version of this product]
kaitou.frey (11) on 21, May. 2015 13:34 (HKT)
A must for Tales fanatics
I haven't miss playing any Tales series game yet, each has its own good and bad sides. I can't give it 5 stars but I can say this is one of the best Tales game released so far.
[This review is based on another version of this product]
ravelt.heart (2) on 05, May. 2015 23:38 (HKT)
Awesome
I love it, the new enviroment is great, and the characters have a good personality. Only the skill system is more complicated than the previous "Tales of"but the story is good and interesting :)
[This review is based on another version of this product]
furresshu (4) on 17, Apr. 2015 09:04 (HKT)
Enjoyable
The dungeons in Zestiria are easily my favourite from the Tales series; the music is incredible, and the puzzles are fast-paced and inclusive of the game's focus on the four elements. I also greatly enjoyed the immersive battle transitions and hope they'll continue to refine it in future titles.

One of the greatest disappointments was how poorly the main plot handled each character's individual arcs and opted to outright ignore two of them, except for a single subquest. There was an even heavier bias catered towards the protagonist than usual.

Fortunately, the entire cast has excellent chemistry, which often results in cute banters and conversations amongst the party. I wound up liking all of them more than I'd originally anticipated.
[This review is based on another version of this product]
fabianofdcs (7) on 04, Apr. 2015 04:55 (HKT)
Tales of Zestiria
Following the great franchise Tales from Bandai Namco bringing together beautiful narrative, striking characters, enchanting scenery and fun gameplay. Game must for lovers of the series.
1 »