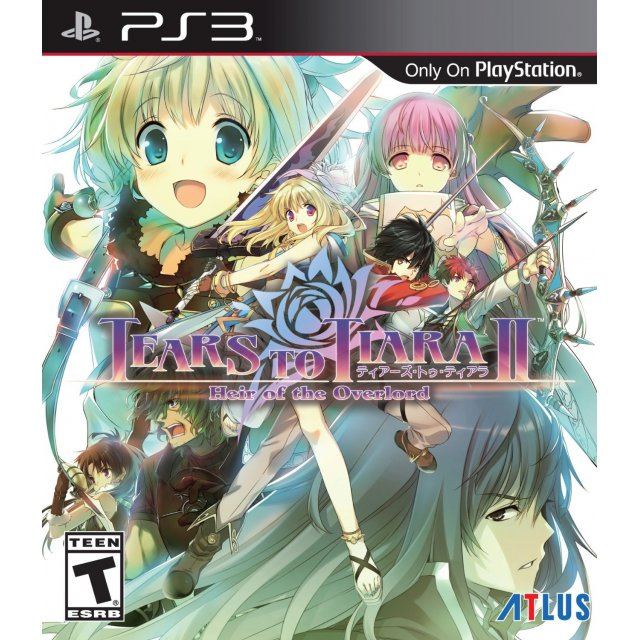 Tears to Tiara II: Heir of the Overlord

Atlus
Rated
By Our Customers
Compatible with PlayStation 3™ (PS3™)


Click on a thumbnail to see more pictures for Tears to Tiara II: Heir of the Overlord

Tears to Tiara II: Heir of the Overlordis a strategy RPG, but with a uniquestory that unfolds much more like avisual novel. As a distant sequel toTears to Tiarait is not neccesary to have played the previous title in order to fully appreciate the game. In fact if you are a fan of strategy RPG's and Japanese storytelling in general then we might have a match!The US release will receive subtitle localization in English, but the voices will remain as theoriginal Japanese.

Embark on the tale of Hamilcar Barca,the last heir to Hispania's royal throne,as he fights to reclaim his land from the Divine Empire! Hamilcarwill fight alongside an entire cast of deep characters,beasts, and even the gods themselves as he learns to control the demon within.

The unique combat is at times a toolforthe story, and as such may take a backseat - but is in no way boring! Over15 main characters, plus side characters and even beasts, can be recruited into your party to allow players the freedom to build their own strategy.There is a very fun combat mechanic calledChain Stockgauge which can be charged up (by dealing/taking damage) to then unleash a Chain Attack. During the Chain Attack playersmust hold down the attack button and release it when the circle on the screen disappears, much like in a rhythm-action game. Higher accuracy =bigger combos!

Tears to Tiara IIwill once again encorporatethe incredibly fun Element Cycle - a wheel that for a fixed amount of time actives a elemental power boost, cycling through the different elements.While the power boost is active each unit with that elemental type will receive a stat boost, and all skills or magic attacks with that element will be more powerful.

If you are familiar with Tears to Tiara II: Heir of the Overlord, why not let others know?

ZANR (2) on 17, Feb. 2018 01:28 (HKT)
99% novel
Pretty boring game. The combats are simple without any difficulty or depth. Graphics that are not up to Ps3.
carlospenajr (97) on 28, Jan. 2018 03:24 (HKT)
Bealtifull S-RPG
A good strategy RPG with a anime graphics, for those who love both, it's a excellent game
MattPieti (2) on 29, Jun. 2017 12:29 (HKT)
Great VN/SRPG
The devs are experienced in making visual novels, so this is a very story-heavy game. There can easily be two hours of story between battles at the beginning. For anyone familiar with the Utawarerumono series, this game is similar, but slightly more SRPG-focused. The SRPG system is very refined, featuring more than 40 main story battles. The Rewind feature makes the game forgiving, allowing you to return to previous turns at any time. This is pretty much necessary on the hardest difficulty. If you only care about the story, set the game to the easiest difficulty and breeze through the battles. If you only care about the SRPG elements, skip the story sequences. Even if you only care about one part of the game (VN or SRPG) and not both, this is a great deal when it's on sale and, in my opinion, still worth the full non-sale price.
Neptuniafan1994 (40) on 23, Jul. 2015 18:58 (HKT)
Nice game
Love the game
nice graphics, story and characters!
Ed (12) on 27, Feb. 2015 05:11 (HKT)
Great SRPG!!
Glad to see the west getting some jrpgs we usually not get. Good story and controls. It also comes with a nice art book. Recommended to jrpgs fans.
1 »