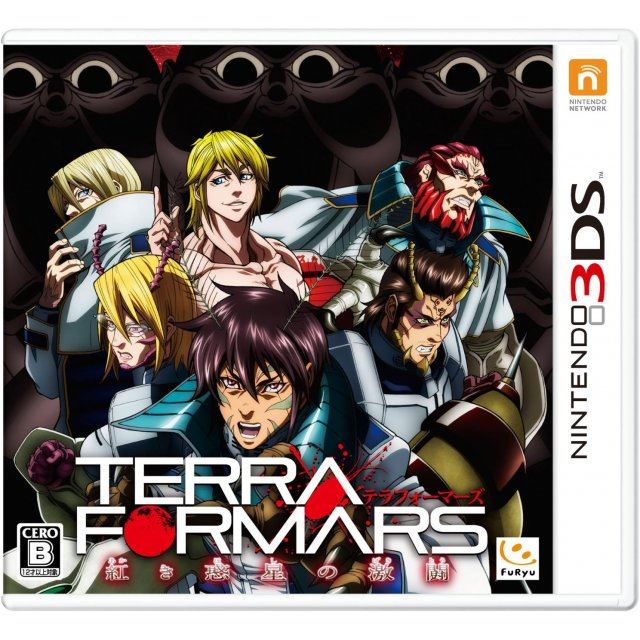 FuRyu
Compatible with Nintendo 3DS™ (3DS)
For JPN/Asian systems only.

Humans, in a quest to expand their reach into the unknown darkness of space, haveset the planet Mars as their target. If colonization is to succeed, humanity will reach a new zeitgeist, taking one step closer to the heavens that have forever looked down on thisinsignificant species.

In order to prepare Mars for the eventual exodus, and in their earnest preperationusing the greatest of minds, mankind has unwillingly designed a great folly, despite the genius of this plan.

By sending the most resilient of all of Earth'sspecies first, Mars becomes finally habitable through the slow influence of the common roach, yet when the time came for mankind to claim their new home, they were not prepared for what they saw - these terraformers had transformed at a frightening pace into humanoid roaches with a frightful intelligence - a perverse possibility of evolution, and man's biggest threat.

Terra Formars: Akaki Hoshi No Gekitou (Fierce Battle on the Crimson Planet) is a battle action game developed by Furyu, and puts gamers into an impossible situation. By controlling several members of Earth's brightest - genetically modified and empowered with primordial DNA, this title based on the popular manga series brings high action into a unique world.

Featuring mainstay characters from the series, fans will be able to play as the berserkerShokichi Komachi (Japanese Hornet), the cunningMarcos Eringrad Garcia (Huntsman Spider), the resoluteKeiji Onizuka (Mantis Shrimp), the elegantAkari Hizamaru (Japanese Silk Moth), and of course, the ultra powerfulMichelle K. Davis (Blast Ant). There are other characters yet to be confirmed, but it's been shown that one can even play as a Gold Terraformar!

Fans of the manga will be pleased to see that there is also an original story to accompany the action - whether this new story is just as heartbreaking as the former, this has yet to be seen. There's also a competitve VS mode and reign supreme in the "Super Mars Ranking Mode." Lastly,Terra Formars: Akaki Hoshi No Gekitou has a secret mission which serves as a prelude by explaining the events 20 years prior, and there are also exclusive Terraformar cockroach foes only in the game.

Coming out on April the 2nd,Terra Formars: Akaki Hoshi No Gekitou is a game for those who love manga styledscifi, and absolutely hate roaches~

If you are familiar with Terra Formars: Akaki Hoshi no Gekitou, why not let others know?

For a low price, is may be a good addition for the fans of this serie.