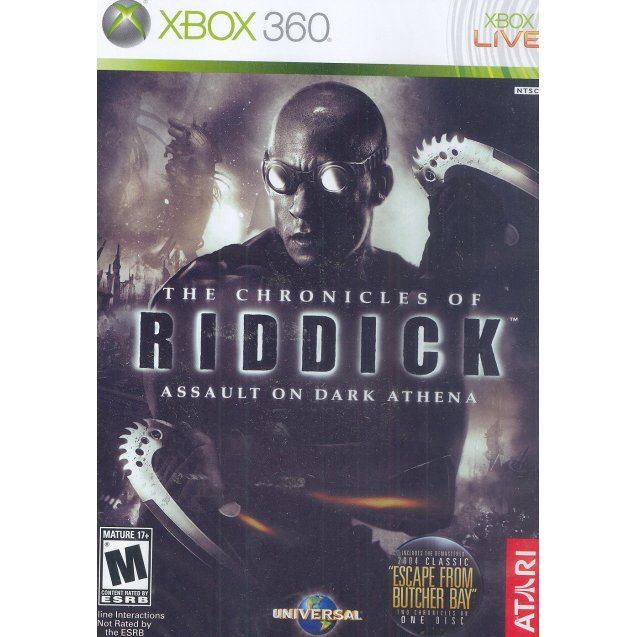 The Chronicles of Riddick: Assault on Dark Athena

Atari
Rated
By Our Customers
Compatible with Xbox360™ (X360)

The most wanted man in the universe slams into gaming!

Become Riddick and break out of the galaxy's most deadly prison in this compelling 1st person action experience - The Chronicles of Riddick™: Escape from Butcher Bay.

Set before the events of both Universal Pictures' upcoming summer release, The Chronicles of Riddick, starring Vin Diesel, and the 2000 breakout hit Pitch Black, which first introduced Diesel as enigmatic anti-hero Riddick, the game tells the story of Riddick's dramatic escape from the previously inescapable triple max security slam Butcher Bay, home to the most violent prisoners in the universe.

If you are familiar with The Chronicles of Riddick: Assault on Dark Athena, why not let others know?

Once again, Swedish developer Starbreeze Studios (the Darkness) delivers an engaging mix of stealth & combat fps gameplay with a character, story & setting-driven experience, putting you in the shoes of Riddick (played by Vin Diesel).

I haven't checked out the multiplayer portion of the game but am confident enough to recommend this title as a must buy on the story-driven experience alone!

One of the few titles that will have you firing it back up immediately to replay missions and hunt for achievements! Enjoy!
williamrjun (124) on 06, Nov. 2010 23:34 (HKT)
Fantastic !
A must buy for every one that loves FPS. In fact, theres 2 games in 1!
cmurray7 (29) on 22, Apr. 2010 16:26 (HKT)
Great game!
Dark Athena is worth buying just for the fact that Vin Diesel lent his voice to the game. You'll feel like Riddick is right over your shoulder (a terrifying thought, actually) as you stalk the shadows. Loads of fun!