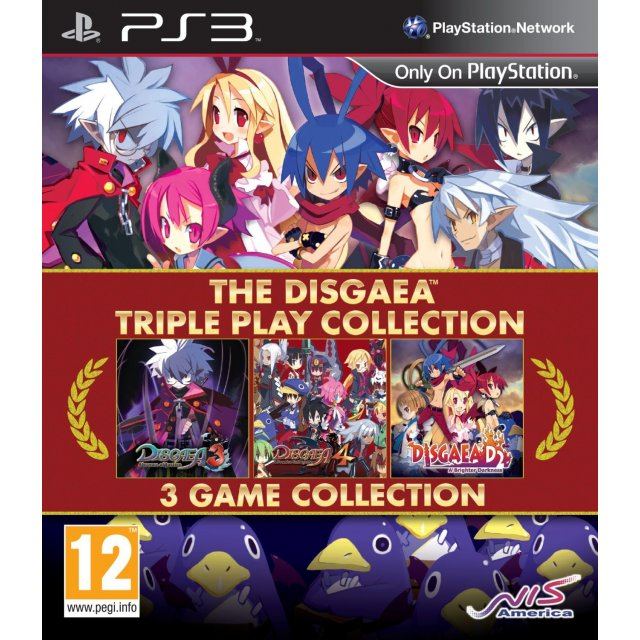 sold Out of print / Out of stock.
Manufacturer
NIS America
Compatible With PlayStation 3™ (PS3™)
Version

The Disgaea Triple Play Collection is an incredible 3-game collection of strategy RPG's on PlayStation 3. Included are Disgaea 3: Absence of Justice (originally released in North America on August 3, 2008), Disgaea 4: A Promise Unforgotten (September 6, 2011), and Disgaea D2: A Brighter Darkness (October 8, 2013), all on one glorious disc!

Disgaea 3: Absense of Justice - When the son of the Overlord steals a fake hero's title, an all-out brawl for Evil Academy supremecy breaks out! Who will arrive victorious: The aspiring freshmen, the refined sophomores, or the mythical seniors? Fight it out, for the sake of the Netherworld! Disgaea 3 improves upon the already awesome Disgaea battle system, introduces a brand new cast of characters, and takes advantage of the PS3's next-gen features. With loads of DLC for hardcore fans and a bunch of trophies for super hardcore fans, picking this up is a no-brainer!

Disgaea 4: A Promise Unforgotten - This latest incarnation of the popular Disgaea strategy RPG series boasts major graphical improvements, Disgaea's most in-depth gameplay yet, everlasting value, and the great sense of humor you've come to love. The new graphics engine truly brings Takehito Harada's characters to life with fluid animations and high definition details. Create your own political party and take advantage of a slew of new battle and strategic features expanding upon the already staggering replay value. Finally, Disgaea 4 adopts an all new map-generating mode, enabling players to create and share custom maps with other players around the world! You can even design your own pirate ship to attack them with! This summer, Disgaea 4 will relentlessly invade your gaming room! Beware!

Disgaea D2: A Brighter Darkness - The Netherworld a place where might makes right and today's friends are tomorrow's enemies. After a long journey with many ups and downs, Laharl finally finds himself as a full-fledged Overlord. However, the other denizens of the Netherworld do not see him as such, so he sets out on a journey with his loyal(!?) vassals to receive the respect he deserves. Along the way, Laharl will meet a girl who claims to be his sister, demons with bigger than usual chips on their shoulders, and find out that even his own body holds a few surprises for him...

No reviews for The Disgaea Triple Play Collection yet.