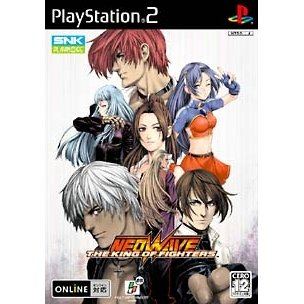 The King Of Fighters NeoWave

SNK Playmore
Rated
By Our Customers
Compatible with PlayStation 2™ (PS2™)
For JPN/Asian systems only.

sold Out of print / Out of stock.
Manufacturer
SNK Playmore
Rated By Our Customers
Compatible With PlayStation 2™ (PS2™)
Version

Taking a step into technical enhancement of the King of Fighter Series, The King of Fighters NeoWave is the very first port of the series based on Sammy's Atomiswave arcade hardware.The title features all 43 playable characters that can be found in the original, plus 5 additional ones, which are exclusively available in the home version only. Three performance modes can be selected, which includes a "super cancellation mode", "guard break mode" and a "MAX2 mode".The game supports online matching using the KDDI Multimatching BB service. A character edit mode lets you customize the color palette of the characters to use online.闘いの記憶を刻み込めアーケードで好評稼動中の「ＫＯＦネオウェイブ」がオンラインバトル搭載で早くも登場！≪総勢43キャラクター+αが登場！≫アーケード版で登場したキャラクターは勿論、｢PlayStation 2｣版にはさらにキャラクターを追加≪任意に遊べる性能(モード)を、闘い方にあわせて選択可能！≫｢スーパーキャンセルモード｣｢ガードブレークモード｣｢MAX2モード｣の3つのモードを搭載！≪オンライン対戦機能搭載！≫マルチマッチングBB対応で自宅にいながらにアーケードさながらの白熱したバトルが楽しめる！

If you are familiar with The King Of Fighters NeoWave, why not let others know?

marchli (21) on 05, Feb. 2013 18:16 (HKT)
New wave?
the game is ok, but i like 02 more...
Lazlow (2) on 08, Jan. 2007 23:07 (HKT)
Solid, but lacking
Picked this up recently and I found it pretty disappointing. Lavish looking backgrounds, but there is nothing terribly new here. Same old sprites, same old characters, same old moves, same old game ruining cheap-as-hell boss, and probably one of the worst KoF soundtracks. 2k3 probably was the best improvement music wise since \'99, but the music in NeoWave is almost like bland elevator music.

Considering I\'m a pretty diehard KoF, I was rather shocked to feel completely uninterested when playing through NeoWave.

Stick to either \'98, \'99, \'02, or 2k3.
recca1800 (5) on 22, Mar. 2006 19:37 (HKT)
A prettier ultimate battle
I was excited to pick up neowave and found out a few things: the game looks great, the style select leads to intresting fights especially with Just Defend, the music has a few good songs, and the cool feeling seeing Geese in his AOF2 look again. Gameplay feels alright but not as tight as 2k2.
If you want it as something new, pick up NGBC instead but if you\'re a die hard kof fan and can spare the $$$, try it out.
Flit (116) on 30, Aug. 2005 07:23 (HKT)
KOF Neo Wave pwns the noobs!
I find myself playing this and thinking “What took SNK so long to make a modern KOF game?” The music is really good, the backgrounds look fantastic and it supports 480p for the HDTV users out there. When you see this game running in 480p it really dose look better then the arcade version. I just hope the one day they are going to upgrade the character models, they keep using the same ones from over 10 years ago. C’mon SNK! You better do it with KOFXI!
kongming (2) on 03, Aug. 2005 01:38 (HKT)
KOF2002 part Deux
A good KOF that didn\'t take enough advantage of its new hardware to improve on the series much. The PS2 version got some nice bonus characters and improved visuals, but Neowave, in the end, is \"Side B\" of KOF 2002. The biggest difference is that you can choose from three different system \"modes\" and online play (which I haven\'t used, so can\'t comment on).

In short, good if you don\'t already have \'02 or want online play. Otherwise, might want to think this over before purchasing.