The King of Fighters XIV
Atlus
Compatible with PlayStation 4™ (PS4™) 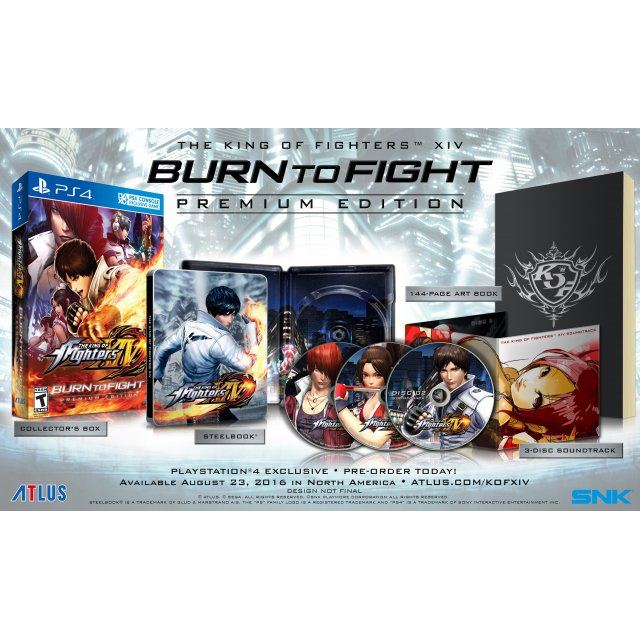 The King of Fighters XIV [Burn to Fight Premium Edition]

Atlus
Rated
By Our Customers
Compatible with PlayStation 4™ (PS4™)

Celebrate the 3D evolution of The King of Fighters XIV with the “Burn to Fight” Premium Edition. The game disc will be encased in a collectible SteelBook emblazoned with the series’ fiery mainstay, Kyo Kusanagi, literally burning to fight. KOF enthusiasts will also be graced with a 144-page art book with original character and stage drawings from throughout the series. Those looking for an audio fix will be given a three-disc soundtrack (housed in a gorgeous Mai Shiranui illustrated sleeve) comprised of more than 60 electric songs worthy of the greatest fighting tournament in the world. All of these premium items will be packaged in a fiery box adorned with familiar faces and a new character.

The classic 3 vs. 3 battle system is unchanged in KOF XIV and the perfectionists at SNK have made some notable updates to the fighting engine. From streamlining controls to improving the Combo and MAX Mode mechanics, the developers have worked tirelessly to bring hardcore fans and newcomers the most competitive, but accessible, game in KOF history.

If you are familiar with The King of Fighters XIV [Burn to Fight Premium Edition], why not let others know?

loving 14 tho i have still to get the feal of it using my arcade stick im have a good time with it .

the extra goodies were worth it too .
unioncj-db (64) on 23, Sep. 2016 07:50 (HKT)
No title
A good edition.
Ahmed Sameer (75) on 10, Sep. 2016 16:03 (HKT)
The KOF series is back with a blastز
I’ll make this review short, KOF XIV is a great addition to the long running fighting series, the graphics are outdated, but that can be overlooked, the soundtracks and the sound effects are once again impressive (seriously listen to these footsteps) the game play is fast and fun, this is a complete game out of the box so you will spend a lot of time unlocking materials in the gallery section unlike another game that came out last march that didn’t have the basic
choanikijin (141) on 05, Sep. 2016 10:44 (HKT)
KOF is back! Shame about the graphics though...
KOF IV is a very good game with the full roster available immediately on start-up unlike some other game *kof*kof*SFV*kof*kof* (yes pun definitely intended). It has all of the modes you'd come to expect (again unlike some other game), the classic KOF game play with some new tweaks, better online net code, basically it's everything a great fighting game should be. Overall it's a great game, too bad the onscreen graphics looked like they were lifted from the PS2 Maximum Impact series. if they only retained the KOF XIII art style...