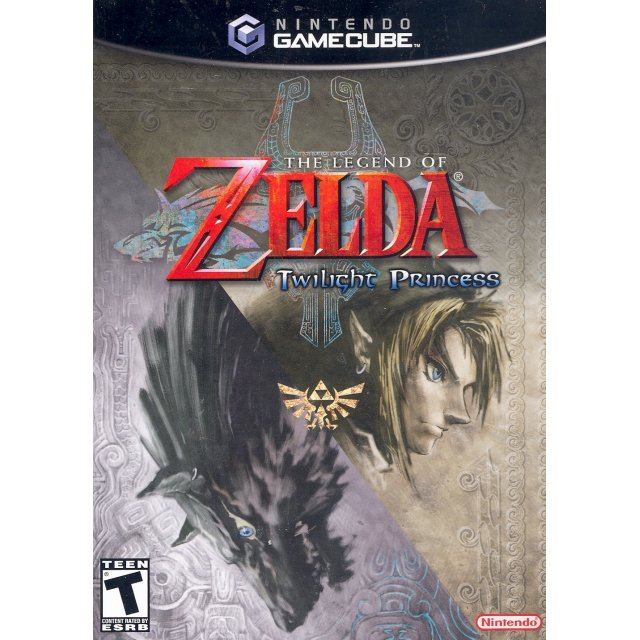 Nintendo
Rated
By Our Customers
Compatible with GameCube™ (GC)
For US/Canada systems, use Freeloader for other.


Click on a thumbnail to see more pictures for The Legend of Zelda: Twilight Princess

When an evil shadow stretches from the heart of Hyrule to its peaceful borderlands, a young farm boy named Link must awaken the hero ... and the animal ... within.

Link, a young man raised as a wrangler in a rural village, is ordered by the mayor to attend the Hyrule Summit. He sets off, oblivious to the dark fate that has descended upon the kingdom. When he enters the Twilight Realm that has covered Hyrule, he transforms into a wolf and is captured. A mysterious figure named Midna helps him break free, and with the aid of her magic, they set off to free the land from the shadows.

Link must explore the vast land of Hyrule and uncover the mystery behind its plunge into darkness. As he does, he’ll have to enlist the aid of friendly folk, solve puzzles and battle his way through dangerous dungeons. In the Twilight Realm, he’ll have to use his wolf abilities and Midna’s magic to bring light to the land.

Besides his trusty sword and shield, Link will use his bow and arrows, fight while on horseback and use a wealth of other items, both new and old.

If you are familiar with The Legend of Zelda: Twilight Princess, why not let others know?

[This review is based on another version of this product]
ccomansargent (10) on 10, Apr. 2009 21:04 (HKT)
The best game of the Zelda series!
This is byfar the best game I've played on Nintendo Wii!
[This review is based on another version of this product]
shendata4 (1) on 18, Dec. 2007 21:57 (HKT)
The only thing i dont like
Well this isnt necessarily a problem but it bothers me that no one remebers links advenutres no one remembers him
which leads me to believe link dies in every game and is reincarnated in very new game just somthing that bothers me its so random you would think some one rememebered him.
[This review is based on another version of this product]
hyuga1995 (5) on 16, Jun. 2007 05:53 (HKT)
i hate this part of the game
What I don\'t like about this game is the beggining has the same plot every time(except for the first two and the majoras mask). You start out as a farm boy and learn moves by a friend or by a relative.
rudy_h7201 (120) on 10, May. 2007 12:45 (HKT)
Great game
It\'s a great game at the end of gamecube era. Thanks to play-asia\'s fast service too
vexx_the_hero (2) on 02, Apr. 2007 23:21 (HKT)
Got it ^_^
Awsome delivery speed! Faster than my last order! Week and a half to arrive, thank you very much play-asia! ^^.

Game\'s awsome! I started playing yesterday!
The game is far more better than rest of game [even a bit better than wind waker]. You can see how this game was invested, the dungeons became more interesting than the old zelda games. 2 Shapes of hero: wolf and human, that\'s a new awsome twist to zelda game. Horse riding\'s beautiful and better than older games.
Plot\'s really awsome! two worlds fused together! And really interesting ^^.
Graphics are amazing, though you can still notice lots of pixels, but I don\'t care, the rest is so much better that you won\'t notice the little pixels =P.
The game\'s also quite easy to guess, I mean, in Majora\'s mask...No way you could beat the game without walkthrough! You have no idea what to do and where to go in most of majora\'s mask....
In twilight princess, most of missions, side quests, quests are quite easy to understand and you can beat them without needing to use any walkthrough, that\'s great! ^^.
Well, I\'m just in the beginning, just finished my 1st dungeon, so I can\'t really tell yet if this game\'s too easy or hard. But till now, it was quite easy and real fun! ^^.

I really recommand this game, especially to Zelda fans ^^.