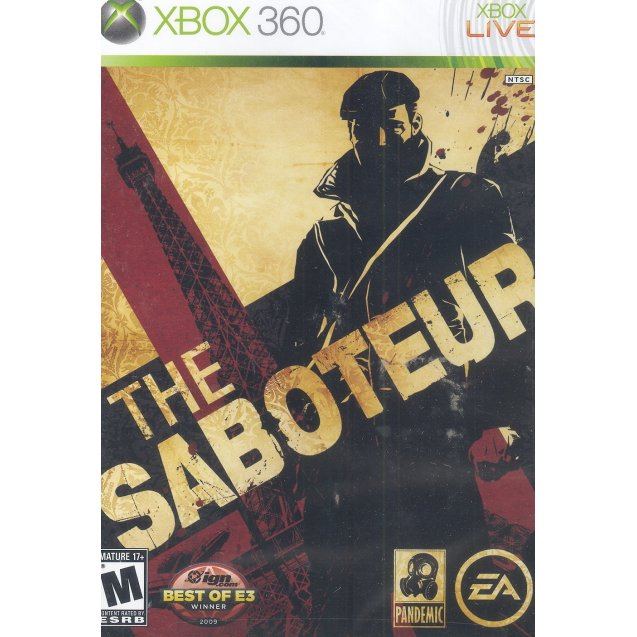 Works on all systems sold worldwide, a correct regional account may be required for online features.
1w Expected stock arrival within 1 week.
US$29.99
Our previous price:US$ 33.99
You save: US$ 4.00( 12% )
Manufacturer
Electronic Arts
Rated By Our Customers
Compatible With Xbox360™ (X360)
Version

Works on all systems sold worldwide, a correct regional account may be required for online features.
1w Expected stock arrival within 1 week
Price
US$29.99
Our previous price:
US$ 33.99
You save:
US$ 4.00( 12% )
Play-Asia.com Return & Refund Policy
Trustpilot
Trustpilot
Click on a thumbnail to see more pictures for The Saboteur

Play as Sean Devlin, a street-tough Irish racing mechanic seeking personal redemption in the first open-world action game set in Nazi-occupied Europe. Now, it's time for payback—with the help of the French Resistance, British intelligence, an arsenal of weaponry, and your own street smarts and brawn, you must exact revenge on those who aimed to destroy your life. Motivated by retribution and armed with tactics of sabotage, blow up zeppelins, derail trains, implode bridges, destroy armored tanks, and level enemy facilities in the name of vengeance.

If you are familiar with The Saboteur, why not let others know?

[This review is based on another version of this product]
ks45acp (1) on 15, Jan. 2014 11:35 (HKT)
good old game
It is possible to play a free space, and can be like.
To break the noticeable thing robbing the tank.
I defy the Nazi race and by car. (Although killed last)
I think the tutorial is long, but that there is fun to be endured it.

Thanks to Play-asia team at the end.
foc83 (35) on 09, Oct. 2013 05:57 (HKT)
Try it out game
Whilst it does an excellent job with the action and the style of the open world, not to mention its numerous cliches and stereotyped characters (which gives some good personality to the game), there is a fair bit to complain about but what's left is a thoroughly solid and greatly enjoyable experiences which pushes no boundaries and fails to innovate.
arrobajunior (24) on 07, Aug. 2013 20:40 (HKT)
Classico!
É um clássico. Ele é muito bom pra quem curte jogo de história da guerra! É um GTA onde está na época da Guerra.
Vale muito a pena! (ainda mais pelo preço)
Recomendo!
[This review is based on another version of this product]
Burnmonkey (154) on 17, Jul. 2013 20:49 (HKT)
Under appreciated Gem
Very ambitious game. Sort of like GTA in a historical setting. Really wish they made more games like this!
AlexMeireles (5) on 20, Jun. 2013 21:22 (HKT)
Good
Very good, open world game, however the graphics are not the best, because the game is old.
but I recommend to anyone who likes this style of game ..
1 »