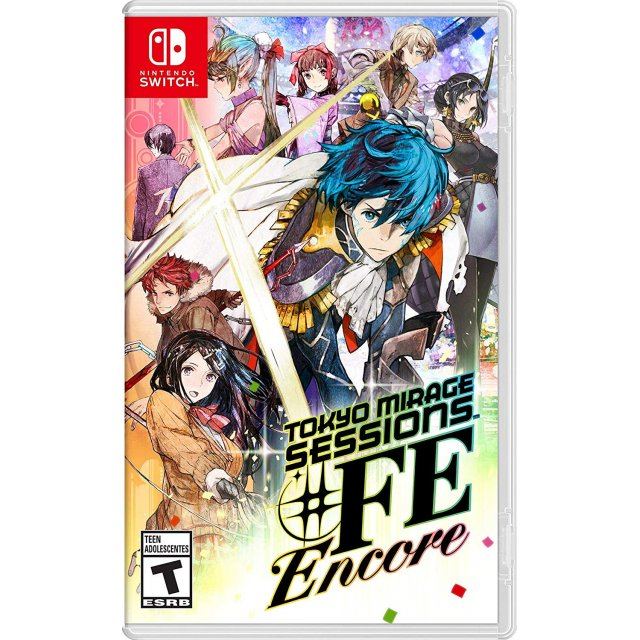 Works on all systems sold worldwide, a correct regional account may be required for online features.
24h In stock, usually ships within 24hrs. (Only 1 left in stock.)
US$59.99
Manufacturer
Nintendo
Compatible With Nintendo™ Switch (SW)
Version

Works on all systems sold worldwide, a correct regional account may be required for online features.
24h In stock, usually ships within 24hrs
(Only 1 left in stock.)
Price
US$59.99
Play-Asia.com Return & Refund Policy
Trustpilot
Trustpilot
Click on a thumbnail to see more pictures for Tokyo Mirage Sessions #FE Encore

The worlds of the Fire Emblem™ series and Atlus games have crossed paths again and the result is coming to the Nintendo Switch™ system. An interdimensional evil has invaded modern-day Tokyo, resulting in this fantastical barrage of music, style, and yes, danger. So, fight back! Battle through dungeons to pump up your strategy and creatively decimate your foes…before all hope fades to black.

You and the rising stars you call friends will need to call on your own creative power—manifested as iconic Fire Emblem characters—to wage a secret war on rogue spirits that feed on creativity. Each encounter will immerse you in deep, turn-based battles that blend the combat of the Fire Emblem and Shin Megami Tensei series into one brutal harmony. Fuse items to craft weaponry; then play to your strengths and crush your foes. Around every corner, you’ll find fun nods to multiple fandoms, including Fire Emblem references, dungeons themed to the entertainment industry, and stunning musical performances.

If you are familiar with Tokyo Mirage Sessions #FE Encore, why not let others know?

mctk (11) on 13, Feb. 2020 13:21 (HKT)
Great port.
This game is pretty much a light hearted Persona game with some Fire Emblem story elements crossing over. I'd recommend it to someone who is a fan of Persona or JRPGs. It's not a strategy game so FE fans should look at gameplay videos before jumping in.

The port itself is well done. Both handheld and docked play well and I haven't noticed any slowdowns. Visual fidelity seems consistent. There is no English audio (the original didn't have either iirc). Text can be had in English.