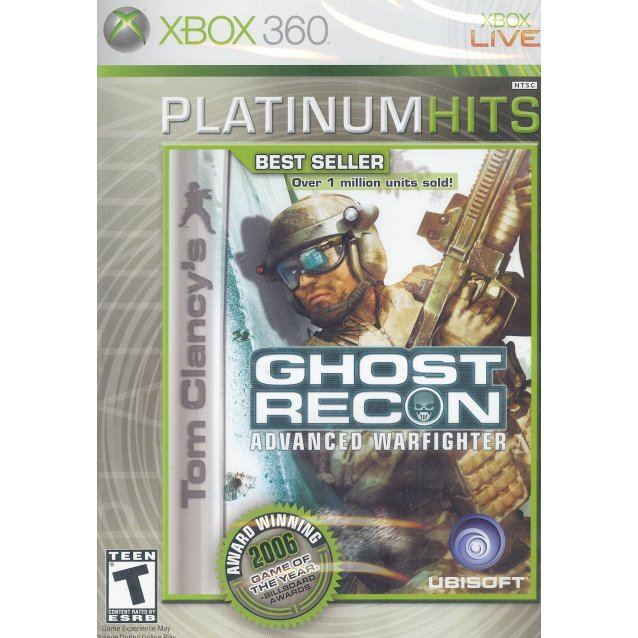 Works on all systems sold worldwide, a correct regional account may be required for online features.
24h In stock, usually ships within 24hrs. (Only 1 left in stock.)
US$11.99
Limited time offer - Secure yours now before the offer expires!

Works on all systems sold worldwide, a correct regional account may be required for online features.
24h In stock, usually ships within 24hrs
(Only 1 left in stock.)
Price
US$11.99
Our previous price:
US$ 15.99
You save:
US$ 4.00( 25% )
Play-Asia.com Return & Refund Policy
Click on a thumbnail to see more pictures for Tom Clancy's Ghost Recon Advanced Warfighter (Platinum Hits)

The face of war has changed in Tom Clancy's Ghost Recon Advanced Warfighter™. Enemy lines blur and there is no longer a clear opponent. New enemies and new threats require a new type of warfare and a new type of soldier. Enter the Ghosts.In 2013, the U.S. Army will implement the Integrated Warfighter System evolving what we know as the modern soldier. IWS combines advanced weapon systems, satellite communication devices, and enhanced survivability into one fully integrated combat system. The IWS program has been developed to meet these new threats head on. Now, it can be tested on the battlefield.In this next installment in Ubisoft's award-winning squad-based military shooter series, become the soldier of the future. Equipped with cutting edge weapons and communications systems, you will find yourself immersed in a detailed universe that sets the stage for the urban war of the near future.

If you are familiar with Tom Clancy's Ghost Recon Advanced Warfighter (Platinum Hits), why not let others know?

brunobreyer (25) on 04, Oct. 2010 09:31 (HKT)
Great and smart game
This game has great graphics and offers exceptional tactical shooting action to back up those great visuals.
Campaign is exciting and challenging, even at normal difficulty. Definetly worth buying under 30 dollars.
devil200 (25) on 11, Dec. 2009 20:40 (HKT)
Great Game
My only problem with the game is the cover system , aprt from that it is a great shooter from Ubisoft . the service wasalso great from PlayAsia .