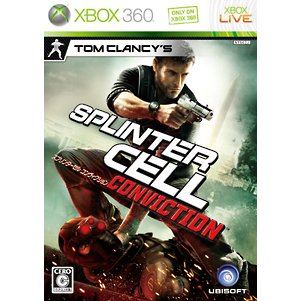 You are a fugitive and you’re being ruthlessly hunted by the very government you once served. The key to your survival is to improvise, adapt and overcome.Experience original game play based on improvisation where your environment becomes your weapon. You need to react to changing situations and use the environment and the crowds around you to create diversions and deter your enemies.Splinter Cell Conviction will deliver an adrenaline rush of game play with blood-pumping chase sequences, close combat and intense gun battles. To survive, build an underground network of allies who will help you obtain hi-tech gadgets and stay one step ahead of your pursuers as you struggle to unmask the forces that want you dead.You’ve never played Splinter Cell like this before.

If you are familiar with Tom Clancy's Splinter Cell: Conviction, why not let others know?

Pros: 'Mark and Execute' really shows that Sam has matured from a loyal by-the-books super-spy to a 'Jason Bourne' type or rogue agent killing machine. The light meter is replaced with the screen going black-and-white when invisible/undetected. The fast-paced game has a variety of guns and mods to choose from. Graphics is great, fluid frame-rates to facilitate the non-stop action. The approach of completing missions has also been diversified; every environment has so many ways of disposing your enemies. Having this said, considering how awesome the game is, the replay value is very high.

Cons: ALSO the 'Mark and Execute'; it just killed what we (the SC fans) used to know about Splinter Cell, which is all about stealth and avoiding alerts and firefight confrontation. Rather challenging even at Normal as this feature requires a rather steep learning curve for SC fans who've been playing since the 1st game, so a lot of adjustments to the style of Sam's approach has to be made.

Overall, this game is still great and totally worth your time and money as you'll be playing it again and again! It's just so addictive being Sam in this game!
[This review is based on another version of this product]
nanzinho_mateus (1) on 21, Feb. 2012 11:59 (HKT)
awesome
very very very good game, I recommend...
[This review is based on another version of this product]
spikedab (12) on 20, Jan. 2012 22:09 (HKT)
Great story, solid game play... what else ?
Sam Fisher is reborn for (I hope) a new trilogy with brand the new game play is just great.
As for every good game, when it's over, you as for more.
Intense but a bit short in solo...
Only dark point is that all other weapons are useless as soon as you get the 5-7 ;-)
1 »