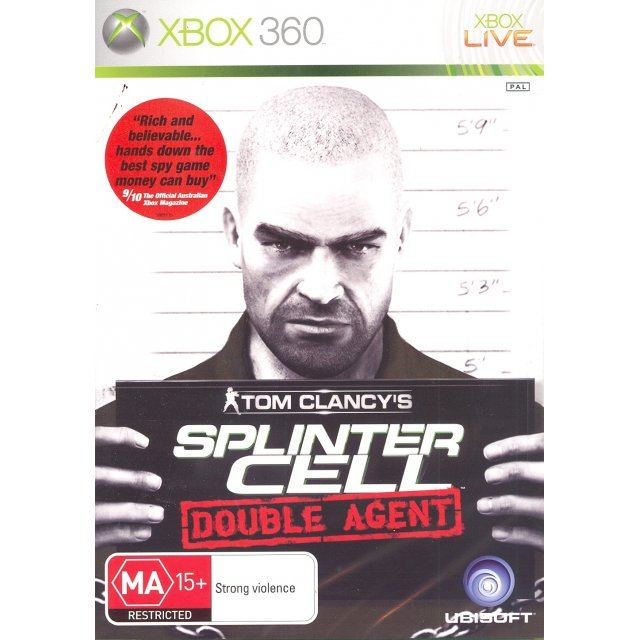 Ubisoft
Rated
By Our Customers
Compatible with Xbox360™, Xbox One™

sold Out of print / Out of stock.
Manufacturer
Ubisoft
Rated By Our Customers
Compatible With Xbox360™, Xbox One™
Version

Veteran agent Sam Fisher is back. But he's never faced an enemy like this before. To stop a devastating attack, he must infiltrate a vicious terrorist group and destroy it from within. For the first time ever, experience the relentless tension and gut-wrenching dilemmas of life as a double agent. As you infiltrate a terrorist organization in its American headquarters, you must carefully weigh the consequences of your actions. Kill too many criminals and you'll blow your cover. Hesitate too long and millions will die. Do whatever it takes to complete your mission, but get out alive.

[This review is based on another version of this product]
PuNiao (365) on 29, Mar. 2007 19:24 (HKT)
Tom Clancy\'s Splinter Cell: Double Agent
Sam Fisher is back in this fourth instalment of the ever popular Splinter Cell series. He takes on his toughest assignment by infiltrating a terrorist organisation in an effort to bring it down. Throughout the game, we see Sam experience that classic dilemman that moles face when he befriends people within the organisatio, blurring the lines of good and bad.

Newcomers to the game need not worry, however; a tutorial on gameplay mechanics have been cleverly integrated into the first stage. A little video pops out at various stages of the game, showing you what move is to be executed before engaging you to press the correct button to re-enact the move just shown. Ubisoft has certainly stuffed Double Agent full of challenging campaigns as well as an interesting multiplayer mode that offers high replay value. While Splinter Cell Double Agent is released for both the Xbox and Xbox 360, it is interesting to note that both the titles are not identical at all - gameplay and storyline are treated differently, presenting two sides to the story, something that Splinter Cell fans might want to explore.
stillmana on 03, Mar. 2007 02:39 (HKT)
italian
there is italian audio
yucca (101) on 02, Mar. 2007 02:07 (HKT)
Thank you
Good game. Good and fast delivery.
Adiel Gicelter on 21, Jan. 2007 16:31 (HKT)
Super Game And Super Play-asia!!!
Really..... I Finished the game! amazing!

and play-asia were really great (delivery and help wise!)