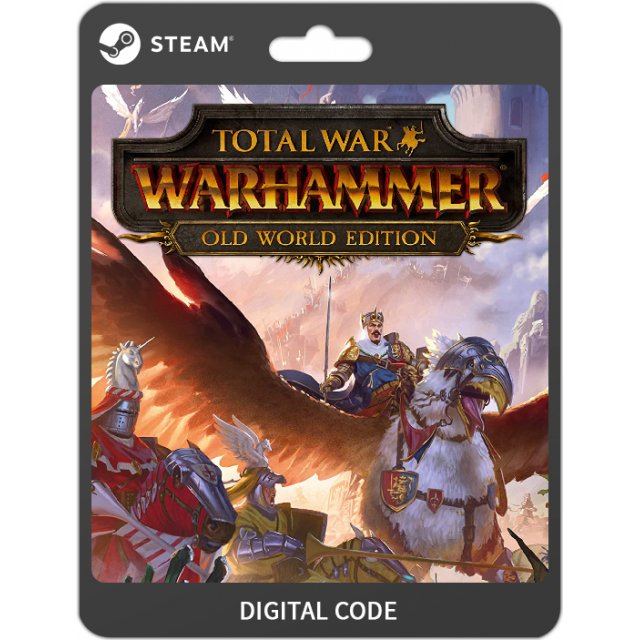 Region Free
This item will deliver instantly in your account. Some orders may be subject to verification by SMS or Voice which may cause delays.
US$48.15
Manufacturer
Sega
Compatible With Windows™ (PC)
Version

Total War: WARHAMMER 'The Old World Edition' includes the original game, plus:A brand new playable Race, Bretonnia - Famed throughout the Old World for its chivalry the Kingdom of Bretonnia sends forth its Knightly Orders in the name of their fair deity, the Lady of the LakeAn exclusive novella: 'The Prince of Altdorf' - This original short story chronicles the rise to power of the mighty emperor and noble statesman, Karl FranzBrand new artwork: Featuring King Louen Leoncoeur of Brettonia riding into battle against the unholy Vampire CountsThe valiant Karl Franz marshals the men of the Empire, seeking to unite the fractured elector counts under a banner of strength against their common enemies.Hungry for the vicious brutality of combat, the Greenskins flock to the tribe of Grimgor Ironhide; Orcs and Goblins alike filled with an insatiable thirst for carnage.High King Thorgrim orders the stoic Dwarfs forth from their mountain strongholds, marching to vengefully right the grave injustices dealt to them over the millennia.Yet the motives of the Vampire Counts under Mannfred von Carstien are shrouded in murderous secrecy, his armies raised from the rotting ranks of the dead. And while the Old World becomes torn by betrayal, war and the unleashing of unfathomable power, a greater threat still whispers in the winds from the north. The fabric of reality itself begins to rend and buckle?A unique combination of colossal real-time battles and an addictive turn-based sandbox campaign game of statecraft, politics and empire building, Total War: WARHAMMER will deliver hundreds of hours of absorbing gameplay.What is more, this title will go on to combine with two further standalone instalments and additional content packs to create the largest Total War experience ever. An epic trilogy of titles that will redefine fantasy strategy gaming.This is the dawn of a new era. Total War: WARHAMMER brings to life a world of legendary heroes, towering monsters, flying creatures, storms of magical power and regiments of nightmarish warriors.Our rules have changed; the only constant? is war.

No reviews for Total War: Warhammer (Old World Edition) yet.