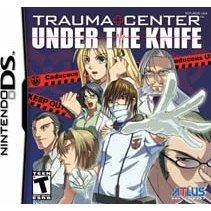 sold Out of print / Out of stock.
Manufacturer
Atlus
Rated By Our Customers
Compatible With Nintendo DS™ (NDS™)
Version


Click on a thumbnail to see more pictures for Trauma Center: Under the Knife

Trauma Center: Under the Knife lets YOU play doctor. The stylus will be your scalpel as you make incisions, anesthetize problem areas, remove tumors, monitor vital signs, apply bandages, and more! Deal with high-stress situations and human drama between appointments, but keep a cool head, or you’ll be out on the street.

If you are familiar with Trauma Center: Under the Knife, why not let others know?

nathan_belmont (14) on 01, Dec. 2010 03:36 (HKT)
Difficult but addictive
I liked this game, the gameplay is really challenging, however the plot is kinda weak and in occasions it will feel a little boringsome, but the operations moments were amazing. I hope that the sequel counts with a more variety of operations.
Kuroimaken (8) on 07, Sep. 2010 05:58 (HKT)
Addictive and incredibly difficult
Despite the fact that motion detection-capable controllers had been available for some time when it was first released, Trauma Center was still an incredibly fresh experience. An operation game could have been something simple to consider yet difficult to implement. Atlus brought us this gem of gamemaking and we love them for it.

The player takes on the role of Derek Styles, a doctor fresh out of residency whom, after a particularly stressful experience, discovers he has the "Healing Touch" - the ability to concentrate so hard on the operating table that he manages to pull off operations no one else does. The game follows the good doctor as he descends into a spiral of madness against the medical terrorism organization Delphi, which claims doctors are intruders upon natural selection, and develop several strains of an artificial disease called GUILT in order to overpower them.
All things considered, the localization doesn't hurt the enjoyment of the story - despite the name of practically every character being changed around, and the scenario of the game being changed to the US, the plot remains consistent. Some might say the game's story is quite a stretch; personally, I feel that it is used as a tool to get the player involved in the operations themselves, instead of looking at it as repetition.
Control is entirely stylus-based. Each condition has a method of being dealt with, with some conditions requiring the use of multiple instruments, and in some operations, several conditions require the player's attention at once. Speed and precision is of the essence - should the player find he has to sacrifice one or the other, precision should be his pick.
The soundtrack is fairly simple, but it gets you quite involved. Graphics wisem the game is none too shabby, particularly in the operations themselves.
One point that may be considered either a plus or a minus is the difficulty. It scales quickly and relentlessly. Each operation requires the player be faster and craftier than the last. Upon finishing the game, one gains access to "secret operations" that are even harder than the main game. Definitely not for the faint of heart, but garanteed to keep you busy for hours as you knit, slice, extract, inject and drain the sickness out of your patients.
cmcintosh (18) on 18, Oct. 2006 09:15 (HKT)
Great at fist, gets old after a while
This game is insanely addicting within the first couple weeks of playing, but eventually gets to a part where everything is just too repetitive, and you\'ll end up just getting bored.
djfdjkfjdjfsdjfksdk on 10, Aug. 2006 10:28 (HKT)
one of the coolest games!!!
this game is AWSOME!!! My friend let me play it and i loved it!!!
Serpico on 05, Jun. 2006 07:57 (HKT)
Horrible
This game is far too hard, the story as well as the music are lame and soon about to drive you insane. Although it is quite a great idea to develop a game like this on nintendo ds I wouldn\'d recommend you buying it, except you\'re ready to try several operation at least about 20 times á five minutes without getting a clue what exactly you\'re making wrong (many operations depend on luck and hardly on your own skills).
1 »