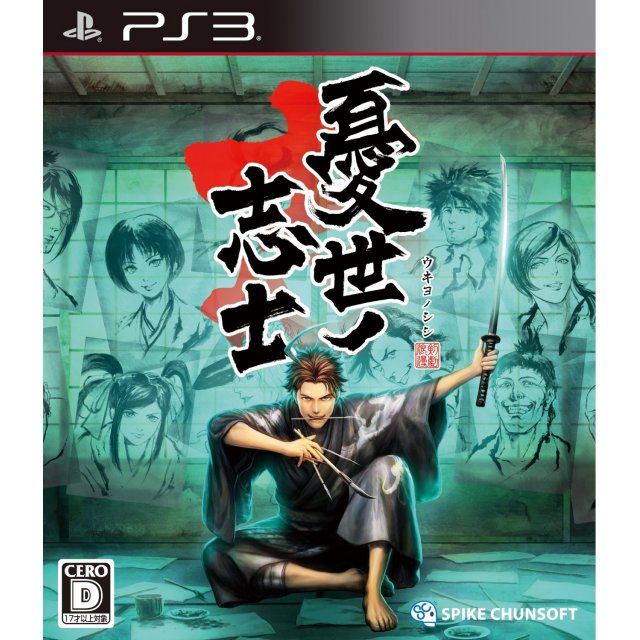 Works on all systems sold worldwide, a correct regional account may be required for online features.
1-5d Expected stock arrival within 1-5 days.
US$55.99
Our previous price:US$ 59.99
You save: US$ 4.00( 7% )
Manufacturer
Spike Chunsoft
Compatible With PlayStation 3™ (PS3™)
Version

Works on all systems sold worldwide, a correct regional account may be required for online features.
1-5d Expected stock arrival within 1-5 days
Price
US$55.99
Our previous price:
US$ 59.99
You save:
US$ 4.00( 7% )
Play-Asia.com Return & Refund Policy
Trustpilot
Trustpilot
Click on a thumbnail to see more pictures for Ukiyo no Shishi

Spike Chunsoft are releasing a pair of samurai games for both the PS3 and PSVita in February, each with their own story. Here's the kicker: the First Print bonus for both versions will include a discount code for the alternative version, as well as the "Mutsunokami Yoshiyuki" sword for PS3 and the "Kaga Kiyomitsu" sword for PSV.

Both versions of the game take place during the Bakamatsu, a period of uprising in Japanese history that marked the final years of the Tokugawa shogunate. The PS3 and PSV versions will each tell a very different story from the two opposing perspectives of the conflict.

The ukiyo-e art style is highly associated with this period of Japanese history, so much in fact that Spike Chunsoft have dedicated the "Ukiyo Engine" to allowing players to transform their surroundings to look like that of a ukiyo-e painting.

In Ukiyo no Shishi, the PS3 title, the story revolves around the 'Ishin Shishi', a group dedicated to the anti-shogunate side of the conflict who favored the return of the Japanese imperial house to power. At the heart of the story lies the historical figure Sakamoto Ryoma who has lost his memory in the game and sets off to regain his identity one step at a time with the help of other historically-inspired characters.

Meanwhile Ukiyo no Roushi, for PSVita, switches focus to Okita Yoshijiro, a young man who is following in the footsteps of his uncle Okita Souji in joining the Shinsengumi, one of the groups who readily oppose the Ishin Shishi. Assigned as an inspector under the famous Saito Hajime Okita Yoshijiro must ensure the safety of Kyoto by solving mysteries and revealing culprits. But as the conflict grows Okita will find himself thrown headlong into chaos filled with great menaces and Japanese historical figures.

The combat and gameplay mechanics in both games are the same, with both being largely dependent on the types of weapon being used. 8 weapon classes are currently confirmed to be in the title: Uchigatana, One-handed sword, Odachi (great sword), Ninja sword, Dual swords, Spear, Bare hands, and Gun. Each class of weapon will have a set of unique techniques to use during combat and the experience points earned during your fights can be used to unlock even more abilities.

Save data for both the PlayStation 3 and PS Vita games will be shareable between the two titles including exclusive items, weapons, and costumes.

If you are familiar with Ukiyo no Shishi, why not let others know?

fabianofdcs (7) on 04, Apr. 2015 04:56 (HKT)
Ukiyo no Shishi
Action game with sword fights in the best traditional Japanese style. Charismatic characters and engaging plot. Good graphics and gameplay. The Spike Chunsoft did a beautiful job.
young7yang (40) on 20, Feb. 2015 09:59 (HKT)
Such a cool game!
After finishing Ryu Ga Gotoku: Ishin I was eager to jump back into the shoes of Sakamoto Ryoma. And this game was just the cure for my curiosity and love of Japanese history!
hotlimit1 (1) on 20, Feb. 2015 08:24 (HKT)
Awesome Game
+great battle system
+amazing story
+long (~25 hours) and action-packed
+good voice acting
+lots of customization

Recommended for fans of Kenka Banchou, late Bakufu era Japan, or alternate histories. Knowledge of Japanese language recommended to understand the A+ story, and to enjoy the sword customization and picture hunts.