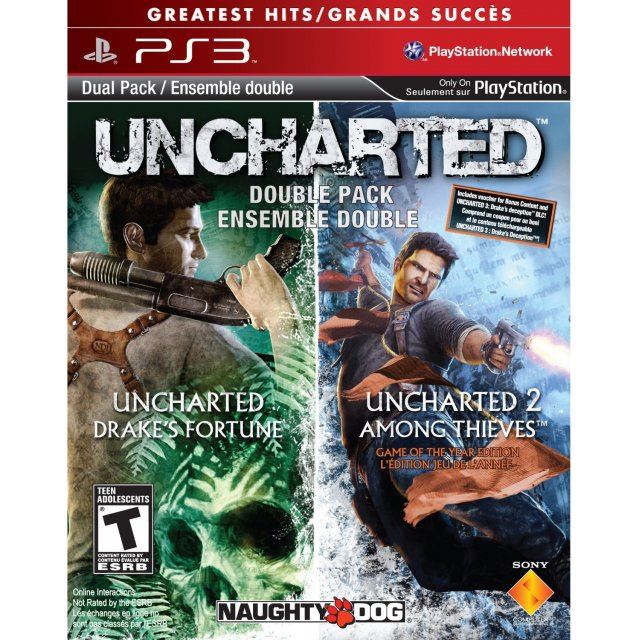 Works on all systems sold worldwide, a correct regional account may be required for online features.
1-2w Expected stock arrival within 1-2 weeks.
US$34.99
Our previous price:US$ 44.99
You save: US$ 10.00( 22% )
Manufacturer
Sony Computer Entertainment
Rated By Our Customers
1-2w Expected stock arrival within 1-2 weeks
Price
US$34.99
Our previous price:
US$ 44.99
You save:
US$ 10.00( 22% )
Play-Asia.com Return & Refund Policy
Trustpilot
Trustpilot
Click on a thumbnail to see more pictures for Uncharted Double Pack (Greatest Hits)

Uncharted: Drake's FortuneA 400-year-old clue in the coffin of Sir Francis Drake sets a modern-day fortune hunter on a exploration for the fabled treasure of El Dorado, leading to the discovery of a forgotten island in the middle of the Pacific Ocean.The search turns deadly when Nathan Drake becomes stranded on the island and hunted by mercenaries. Outnumbered and outgunned, Drake and his companions must fight to survive as they begin to unravel the terrible secrets hidden on the Island.Uncharted 2: Among ThievesFortune hunter Nathan Drake returns in UNCHARTED 2: Among Thieves™, a pulse-pounding third-person action-adventure/shooter created by award-winning developer Naughty Dog. Down on his luck, Drake is lured back into the treacherous world of thieves and mercenary treasure-seekers he had sought to leave behind. When a mysterious artifact propels Drake on an expedition to find the legendary Himalayan valley of Shambhala, he finds himself embroiled in a dangerous game of cat-and-mouse against a fugitive war criminal who’s after more than just the fabled riches of the lost city. Caught in a web of deception and plunged into an increasingly deadly pursuit that tests the limits of his endurance, Drake will be forced to risk everything – but has his luck finally run out?

If you are familiar with Uncharted Double Pack (Greatest Hits), why not let others know?