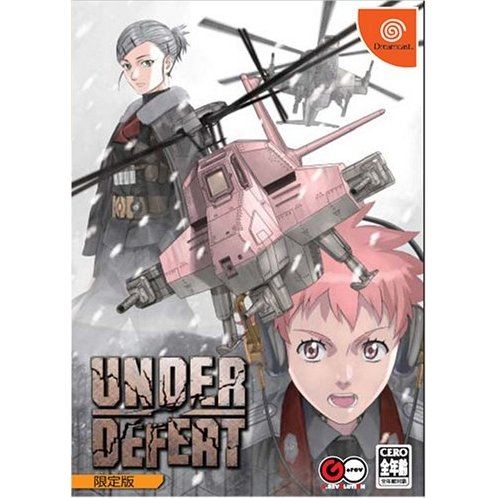 G.Rev
Rated
By Our Customers
Compatible with Dreamcast™ (DC™)
For JPN/Asian systems only.

sold Out of print / Out of stock.
Please take note that, once purchased, this item must be paid immediately and cannot be cancelled or returned.
Manufacturer
G.Rev
Rated By Our Customers
Compatible With Dreamcast™ (DC™)
Version

Under Defeat is a military vertical scrolling shooting game adhering to a realistic screen expression and a simple operation. Graphics are combining a classical 2D game play with 3D background elements and lots of small details. The game is played with 8 direction and 2 action buttons (shoot & bomb).Additions to the Dreamcast version include a variety of setup options, including several display modes and an arrange BGM mode. A pratice mode has been included, in which a stage can be chosen freely and replays be saved. The saved replay can be seen from different viewpoints to study and improve one's skills. The Dreamcast port further contains a Gallery Mode with lots of pictures, artworks and more.「アンダーディフィート」は、リアルな画面表現と、シンプルな操作性、そして破壊の爽快感にこだわった、ミリタリー縦スクロールシューティングゲームです。戦車のサスペンションの軋み、爆風で揺れる木々、風圧になびく爆煙など、「戦場」を構成する様々な要素をフル3Dで細部までリアルに描写しつつも、8方向レバーと2つのボタンによるシンプルな操作で、「撃つ」「破壊する」快感を徹底的に追求しています。完全移植＋αグラフィックや攻略パターンなど、アーケード版のゲーム内容を再現した上で、アレンジBGMの追加や、多彩なオプション設定など、家庭用ならではの独自要素を追加しました。プラクティスモードステージとエリアを自由に選択して練習し、リプレイを保存することができます。保存したリプレイは、様々な視点から鑑賞することが可能です。ギャラリーモードパイロットたちの設定ラフ画や、ステージクリアデモの画像、新規にレンダリングしたイメージCGなど、様々な画像資料を高い画質で鑑賞することができます。

The Legend Of Zelda Ocarina Of Time Rearrange Soundtrack
~ Emiko Shiratori, Moka
US$ 34.99

If you are familiar with Under Defeat [Limited Edition], why not let others know?

MC (9) on 08, May. 2009 17:58 (HKT)
One of the best Shooter at all Times!!!!
G.REV made a great Job! Awesome Graphics, beautiful Explosions, nice Aiming Mechanism, perfect Enemy(s) and Leveldesign. That's how should be Shoot'em up's! In every Way much better than this slow, boring and nerv(change Colors to absorb Shoots) Ikaruga from Treasure! G.REV, you are really Professionals! Only Battle Garegga is better! It is on the same Level with Raiden and the Thunderforce Series! The only sad Things is, there are some Slowdowns in the Game and second, i owned no Copy in my Collection! But i played this once through and it is worth every Price you can find it on the Market! best Regards. mc
daniel_carr (1) on 17, Apr. 2007 05:22 (HKT)
nice aiming mechanism
really fun game where you can aim about 20 degrees either side of forward, depending on which way you\'re moving, then keep that angle of fire by firing. once you get the hang of it you\'ll be dodging enemy fire and shooting them from the side in no time! a lot of fun and keeps me coming back even though I\'m not ver good, yet!
vespene (18) on 22, Jul. 2006 14:31 (HKT)
Great shooter.
This game is beautiful - if played on a VGA monitor. On a regular tv, it isn\'t half as good.

My Under Defeat LE version arrived six days after ordering it, so yet again, extremely good service. I haven\'t had a single problem with play-asia since I\'ve started purchasing games from them.

The game itself takes a bit of getting used to, though, that really isn\'t a problem. I don\'t like Zero Gunner 2 at all, but this game is amazing. You can\'t compare the two. As there\'s a lack of videos regarding this game, I\'ll attempt to explain this to the best of my ability.

The game is a vertical scrolling 2D/3D shooter, and the graphics are akin to Ikaruga. I\'d go to the extent of saying the graphics exceed Ikaruga\'s, simply due to the explosions and amount of detail they\'ve put into the game.

It isn\'t a bullet hell shooter like the CAVE games. It\'s a balance of blowing stuff up, along with bullet dodging. It\'s rather difficult to kill everything on the screen, and you\'re bound to miss a few enemies, so it really feels like you aren\'t some tiny ship killing everything in sight. However, there are bullet patterns as found in CAVE games, but not half as much.

The soundtrack is nice, but it isn\'t special. It\'s a nice addition, and Stage 1 (Can\'t come back) and Stage 5 (Tears which died) are most memorable. But I must admit, in comparison to other OSTs available (ESP Galuda comes to mind), this isn\'t the best of the bunch.

Regardless, I highly recommend purchasing this title, along with a VGA box, along with DC-X. Having this hooked up to a TATE\'d 17\" monitor, and the sound into a subwoofer, makes for an incredible game. I can\'t honestly say this game has the same feeling on a regular tv, although it is still stunning for the Dreamcast.