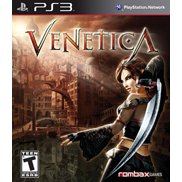 Collections
Atari
Rated
By Our Customers
Compatible with PlayStation 3™ (PS3™)

Works on all systems sold worldwide, a correct regional account may be required for online features.
1w Expected stock arrival within 1 week.
US$21.99
Our previous price:US$ 44.90
You save: US$ 22.91( 51% )
Manufacturer
Atari
Rated By Our Customers
1w Expected stock arrival within 1 week
Price
US$21.99
Our previous price:
US$ 44.90
You save:
US$ 22.91( 51% )
Play-Asia.com Return & Refund Policy
Click on a thumbnail to see more pictures for Venetica

An evil necromancer was able to trick Death and now strives for universal power. Only the daughter of Death, whose existence was a secret until now, has the power to defeat the necromancer and restore the balance.Knowing nothing of her destiny at first, Scarlett has to learn about her special powers and become a mighty warrior, strong enough to defeat the greatest threat to the world of the living.

If you are familiar with Venetica, why not let others know?

[This review is based on another version of this product]
bellarific (1) on 28, Aug. 2013 11:47 (HKT)
Cheap and cheerful :D
A progressively fun and addictive rpg affair with charm and humourous voice acting lol

play it for what it is and you will end up being hooked.
thoroughly enjoyed this game.
it the tops :D

Also does anyone know if the ntsc version works on a pal console?
love to play it again :D
kcraw12 (4) on 22, Jan. 2013 18:07 (HKT)
Pretty good
It's an interesting game. Still having quests, not terrible graphics, and fairly simple gameplay. but the acting is terrible, so much so that it kind of ruins whatever story the game is trying to tell.
It's worth a play, but I had trouble getting over the crappy acting and character development.
trsnolli (9) on 24, Apr. 2012 22:29 (HKT)
Good concept.
The game concept is cool. A RPG with Death`s daughter, unexperiencied, so you can develop the character thru a lot of quests and so on.
But the game itself has a lotof issues. The controls are completely loose, insomuch that become difficult to explore and fight properly.
Gfx are a little outdated, but still OK.
It is the kind of game that you realize that could be great if better developed.
brayanraul_jesus (13) on 09, Feb. 2012 09:24 (HKT)
YOU PLAY ASIA