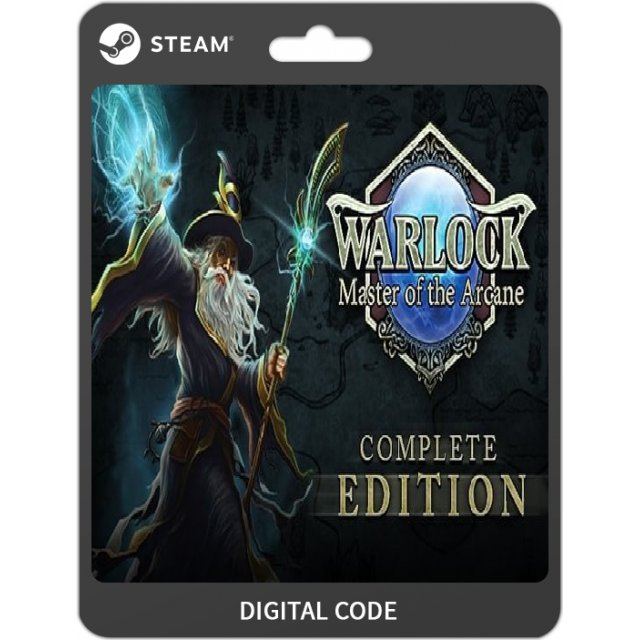 Region Free
This item will deliver instantly in your account. Some orders may be subject to verification by SMS or Voice which may cause delays.
US$6.10
Manufacturer
Paradox Interactive
Price
US$6.10
Play-Asia.com Return & Refund Policy
Click on a thumbnail to see more pictures for Warlock: Master of the Arcane (Complete Edition)

Warlock - Master of the Arcane
In a time of chaotic upheaval, the player takes the role of a great mage, a warlord vying for ultimate power. Your mission is to build an empire, expand your borders, research new spells and conquer your enemies. Become the ultimate Warlock and rule over all of Ardania!

The Warlock: Master of the Arcane Complete Collection brings together the complete trials and tribulations of mage and magic which includes:

Warlock: Master of the Arcane - Armageddon - The ancient prophecy has come true. The End Times are near. The boundaries between worlds have fallen, and the Dremer have entered Ardania. The Great Mages are the only ones who can possibly defend the land, and now more than ever, they need a leader who can gather a force large enough to defeat the Dremer once and for all. Will it be you?

Warlock: Master of the Arcane: Return of the Elves - The elves from the knightly order of Arethi return to Ardania. They come not to serve as they did in the past but to conquer. They bring along the True Knowledge and intend to share its’ light with everyone who will accept it, willingly or otherwise.

Warlock: Master of the Arcane – Master of Artifacts - The ancient and almost forgotten art of making artifacts returns to Ardania. Now every Great Mage can create powerful artifacts imbued with spells, abilities or even strength of the gods!

Warlock: Master of the Arcane – Power of the Serpent - Play as the all-new Great Mage, Malixalxochi, Wizard Queen of a powerful race of reptilian warriors known as the Koatl. Renowned for her cruelty and ferocity, she is a formidable foe to anyone in Ardania who dares oppose her. The new Mage brings two new perks to the battlefield: Lord of Koatls and Koatl Training. As Lord of her race, she can hire fierce reptile Spears, Hunters, Warlocks and of course the powerful Giant Turtle. Then instruct any of your units with Koatl training for increased protection from ranged Melee attacks. Crush your enemies with the Power of the Serpent!

Warlock: Master of the Arcane: Powerful Lords - You are introduced to two powerful lords: the High Blademaster and the Imp Adviser. The two lords will appear near the capitol of the Great Mage who selects the “Master of Blades” and “Demonic Adviser” faction perks at the start of the game.

No reviews for Warlock: Master of the Arcane (Complete Edition) yet.