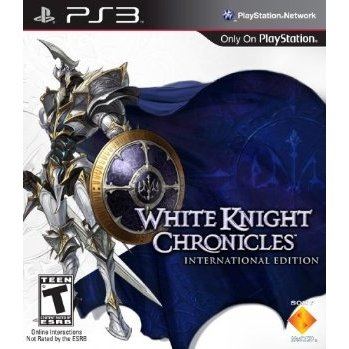 Works on all systems sold worldwide, a correct regional account may be required for online features.
24h In stock, usually ships within 24hrs.
US$16.99
Our previous price:US$ 64.99
You save: US$ 48.00( 74% )
Manufacturer
Sony Computer Entertainment
Rated By Our Customers
Compatible With PlayStation 3™ (PS3™)
Version

Works on all systems sold worldwide, a correct regional account may be required for online features.
24h In stock, usually ships within 24hrs
Price
US$16.99
Our previous price:
US$ 64.99
You save:
US$ 48.00( 74% )
Play-Asia.com Return & Refund Policy
Click on a thumbnail to see more pictures for White Knight Chronicles International Edition

White Knight Chronicles is an epic fantasy tale about two kingdoms in midst of a longstanding war. The King of Balandor, wishing to put an end to the war, invites the duke of Faria to his castle to celebrate his daughter's coming of age. But this celebration is sabotaged by the Magi, a rogue sect seeking to steal the White Knight, an ancient weapon of war sealed beneath Balandor castle, in order to take over the world. During the ensuing chaos, a young man named Leonard accidentally unlocks the power of the White Knight as he attempts to save the princess. With this power, Leonard manages to fend off the Magi attack, but not before they escape with the princess.With the kingdoms in chaos, Leonard is entrusted with the mission to find the Magi and rescue the princess. With the help of his trusted companions, they travel throughout Balandor and beyond on a quest to save the princess before the Magi unlock the other knights. The journey is fraught with danger, with Magi warriors at every turn, mythical beasts and monsters to battle, and forbidden powers revealed. As Leonard learns more about the power of the Knight, he realizes that unsealing all of them could trigger a calamity that could end the world.

If you are familiar with White Knight Chronicles International Edition, why not let others know?

PlayAsia's Trusted (7) on 14, Oct. 2015 18:39 (HKT)
No longer any good
This game is actually rated 3 or 4 stars in my professional opinion, however they have taken the game off the servers and because of this single player is unplayable as you need online service to get strong enough to take on the higher offline dungeons.

If your into just the story single player, Its fine for 2 or 3 stars but its cliche storyline and without online mode its potential is not there.

Not worth the money or time anymore. People that can't get online with this miss out on weapons, armor and crafting its main attraction was to play with friends online now that's not even possible.