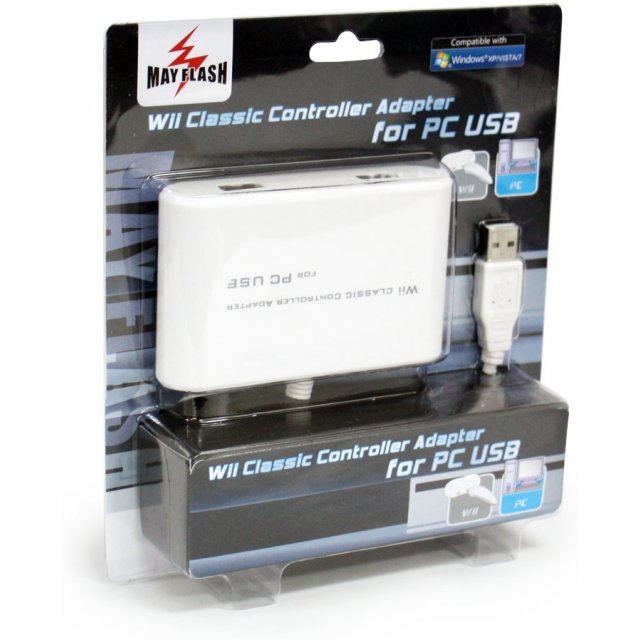 Mayflash
Compatible with Windows™, PlayStation 3™, Wii U™
Get informed when this item is in stock by using our Personal Agent from the right.

If you are familiar with Wii Classic Controller Adapter for PC USB, why not let others know?

Zerker (1) on 13, Aug. 2016 20:44 (HKT)
Does what it says, but has some issues
First, let me say: this is the third one of these I have ordered. The other two have eventually failed for no perceivable reason.

Second: The adaptor does two things that aren't ideal in some cases:
1) It overlays fake buttons onto the Dpad, so both are pressed at once if you press Dpad directions.
2) It does not allow you to switch the Dpad to become the primary X/Y axis.
3) It appears somewhat randomized which port is actually the primary gamepad interface on the PC. Be warned you may need to swap the port to get it to work.

Once you get past all that, being able to play games with the wonderful Dpad of the Classic Controller PRO is still worth it, if your game isn't tripped up by one of the issues above.
rdo_cnt (2) on 14, Jan. 2015 15:52 (HKT)
This adapter works like a charm
It's what you'd expect and no lies about it. I bought 2 hori battlepads along with it to play project m and mario party games on dolphin with my sister and there's no delay to it or anything detrimental.

We didn't have to install any drivers as windows 8 inmediately recognized it. It really is plug and play, even on my ps3 it works, but just 1 of the slots.

The adapter itself feels like it has a surprisingly strong quality and the cable it posseses is long enough to make the length barely an issue.

The only little detail is that we have to be close to each other because the slots are close together and the cables of the hori battlepads are pretty short, but that's not this devices fault.

I recommend it.
Gogoris (8) on 10, Sep. 2014 02:13 (HKT)
Highly Recommended!!
Especially if you have different Classic Controllers like arcade sticks. I recommend using Joy2Key free software to emulate key presses.

The device is light, very simple in design, and has no software needed to install, just plug and play. Some PC games/emulators will recognize the device right away.

Other games that rely on the Xbox 360 controller can be remapped with Joy2Key. I have tried Pac-Man Museum/Pac-Man DX+ with my Wii arcade stick and it is wonderful.

Also tried Super Metroid and Jet Set Radio with Classic Controller Pro, and several other PC games which recognize the controller right away.

I also recommend adding "grip feet" on the bottom of the device so it doesn't move around on your desk or table.
ladyjaye75 (12) on 29, Sep. 2013 11:09 (HKT)
Mayflash Wii Classic Controller Adapter for PC USB
I bought this in order to use my Tatsunoko vs Capcom joysticks on the computer and on the PS3. Although the adaptor can connect two joysticks at a time, on the PS3, only one joystick can be used at a time per adaptor, so we bought a second one for 2-player D&D arcade mayhem. On the PC, the adaptor doesn't work very easily with Windows 7, but that's more a caveat of Windows than the actual adaptor itself. Worth getting if you want to extend the use of the TvC gorgeous joysticks beyond the Wii. All that's missing is a way to make it work on the Xbox 360...