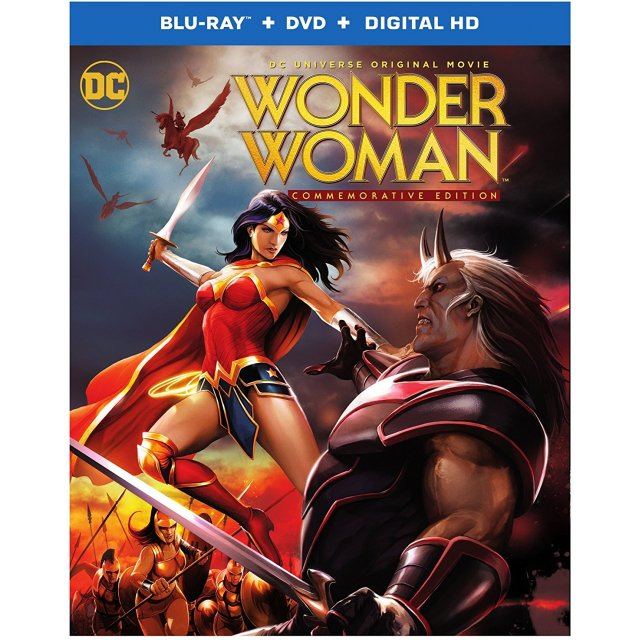 Celebrate the princess who becomes the World's Greatest Super Heroine in this Commemorative Edition of the epic story of Wonder Woman's origin. On the mystical island of Themyscira, a proud and fierce warrior race of Amazons have raised a princess of untold beauty, grace and strength - Diana. When U.S. fighter pilot Steve Trevor crash-lands on the island, the rebellious and headstrong Diana defies Amazonian law by accompanying Trevor back to civilization. Meanwhile, Ares (the God of War) has escaped his imprisonment at the hands of the Amazonians and has decided to exact his revenge by starting a World War that will last for centuries and wipe out every living being on the planet, starting with the Amazons. It is up to Diana to save her people and the world - by using her gifts and becoming the ultimate Wonder Woman!

Special Features: Featurette - What Makes A Wonder Woman: For 75 years, Wonder Woman has resonated with audiences because of her loving nature and quest for truth. Hear some of her biggest fans and fellow creators discuss how her qualities have crafted her into the icon we know today. Sneak Peek - Batman and Harley Quinn: Sneak peek at the next DC Universe Original Movie, Batman and Harley Quinn, featuring the talented filmmakers and voice cast. Creative Team Commentary: Scene and film analysis by producers Bruce Timm & Gregory Noveck, director Lauren Montgomery and screenwriter Michael Jelenic. Featurette - Wonder Woman: A Subversive Dream - A definitive look at a psychologist's dream, and the rich history of one of the pillars of DC Comics. Featurette - Wonder Woman: Daughter of Myth - This revealing documentary explores the archetype and tradition of the female DC Comics Super Hero.

No reviews for Wonder Woman - Commemorative Edition [Blu-ray+DVD+Digital HD] yet.