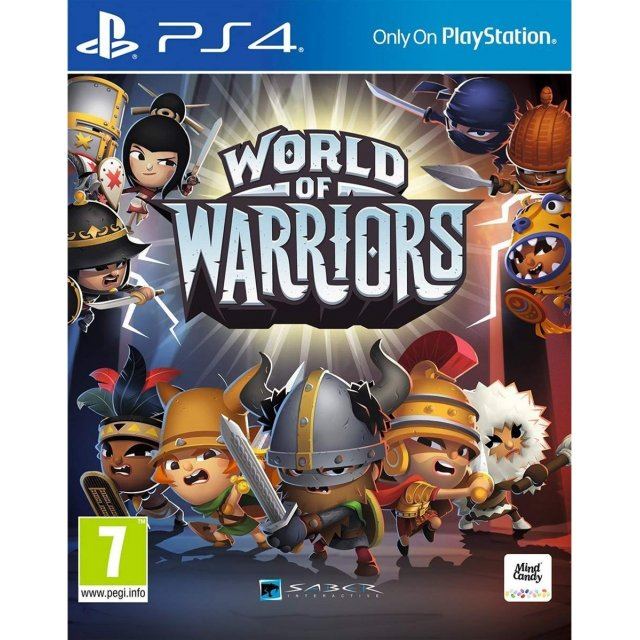 Works on all systems sold worldwide, a correct regional account may be required for online features.
1w Expected stock arrival within 1 week.
US$19.89
Our previous price:US$ 25.99
You save: US$ 6.10( 23% )
Manufacturer
Sony Computer Entertainment
Compatible With PlayStation 4™ (PS4™)
Version

Works on all systems sold worldwide, a correct regional account may be required for online features.
1w Expected stock arrival within 1 week
Price
US$19.89
Our previous price:
US$ 25.99
You save:
US$ 6.10( 23% )
Play-Asia.com Return & Refund Policy
Click on a thumbnail to see more pictures for World of Warriors

Summon your warriors
In a mysterious kingdom far beyond our Earthly realm, armies of the greatest warriors in history are amassing in a world known as the Wildlands.

Romans, Vikings, Samurai, Aztecs, Spartans and many more have answered the call to arms, equipped with their pointiest weapons, fiercest special attacks and most blood-curdling war cries to strike fear into the hearts of up to four players in local or online matches.

Summon fighters from the Temple of Epics to unique arenas where the environment is a mechanic to master in itself – and could turn the tide of battle in your favour. Fight against rivals, team up with friends in four player local co-op or go online and battle your way up the online leaderboards to become champion of the Wildlands.

No reviews for World of Warriors yet.